It’s not very often I get to experience something new at Disney. I’ve ridden all the attractions dozens of times and eaten at nearly every restaurant. But not all of them. So when it worked out in my plans to enjoy a character meal at Tusker House for my first time, I was very excited. I’ve always believed that character meals are best to experience for breakfast. The price point is better than dinner and you can’t go wrong at breakfast when it comes to food. On a recent meal at Crystal Palace for dinner, I was reminded why I stick to breakfast at that specific location.

But for the sake of being thorough and a future video covering more character meals, I still feel it’s worth trying to find good dinner options that involve meeting favorite characters. For the record, I am not one to like buffets that focus on carving stations, meat and potatoes. It’s boring, and I crave something different when I dine at the parks. Especially since Disney chefs have been up-ing their game for the past few years. So I arrived to Tusker expecting something unique, exotic and unlike any other character meal. But would it live up to its good reputation? 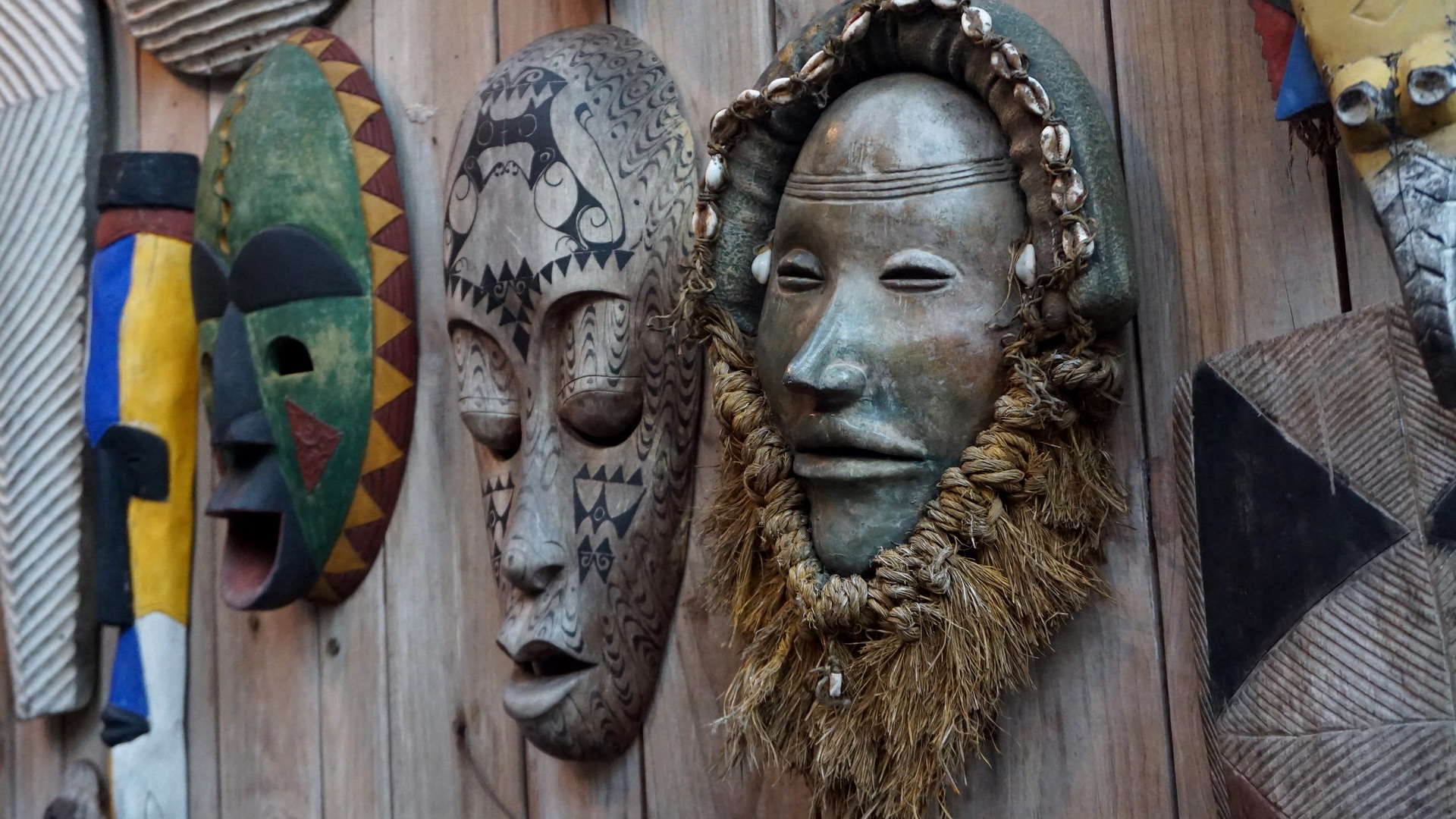 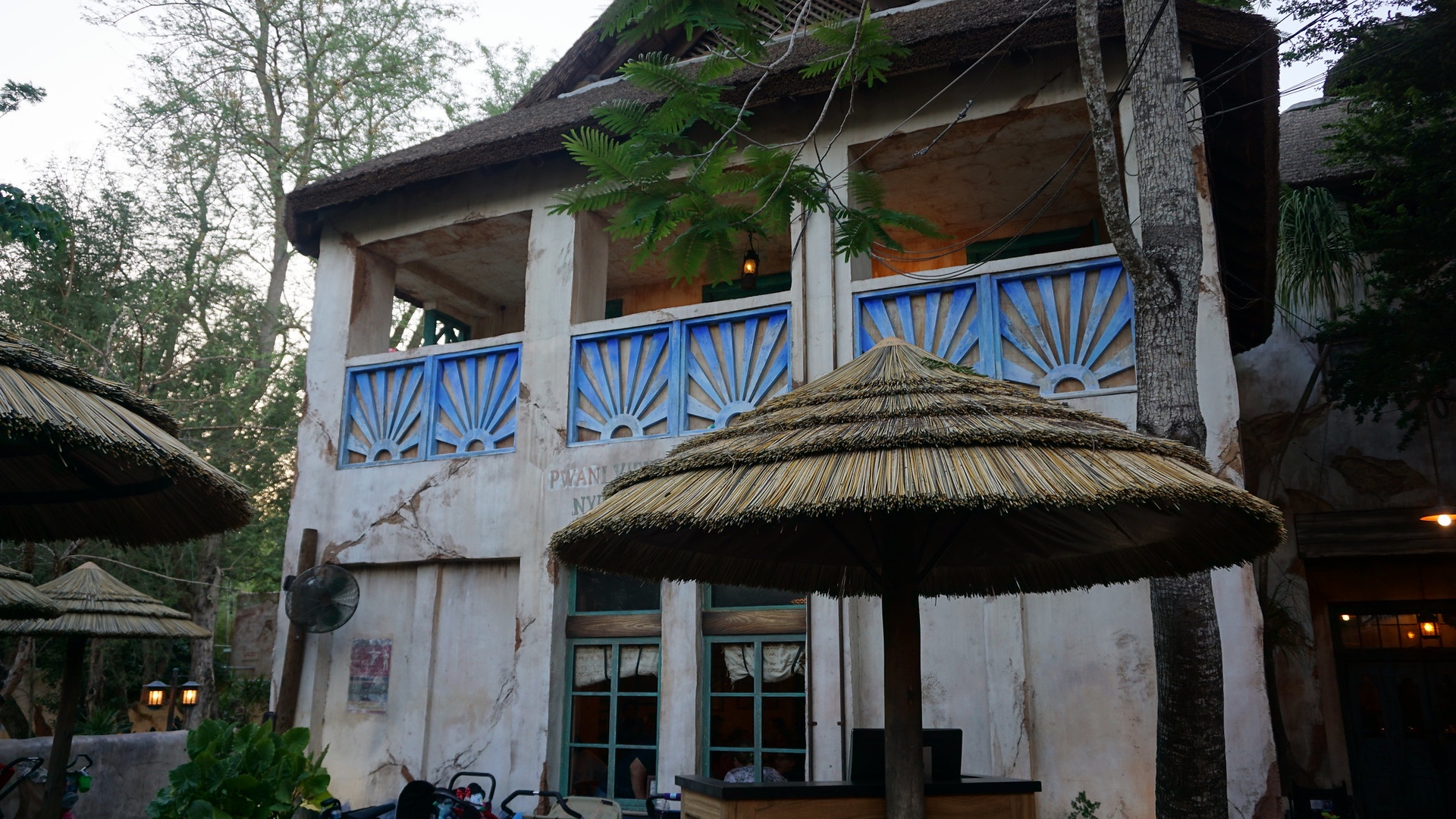 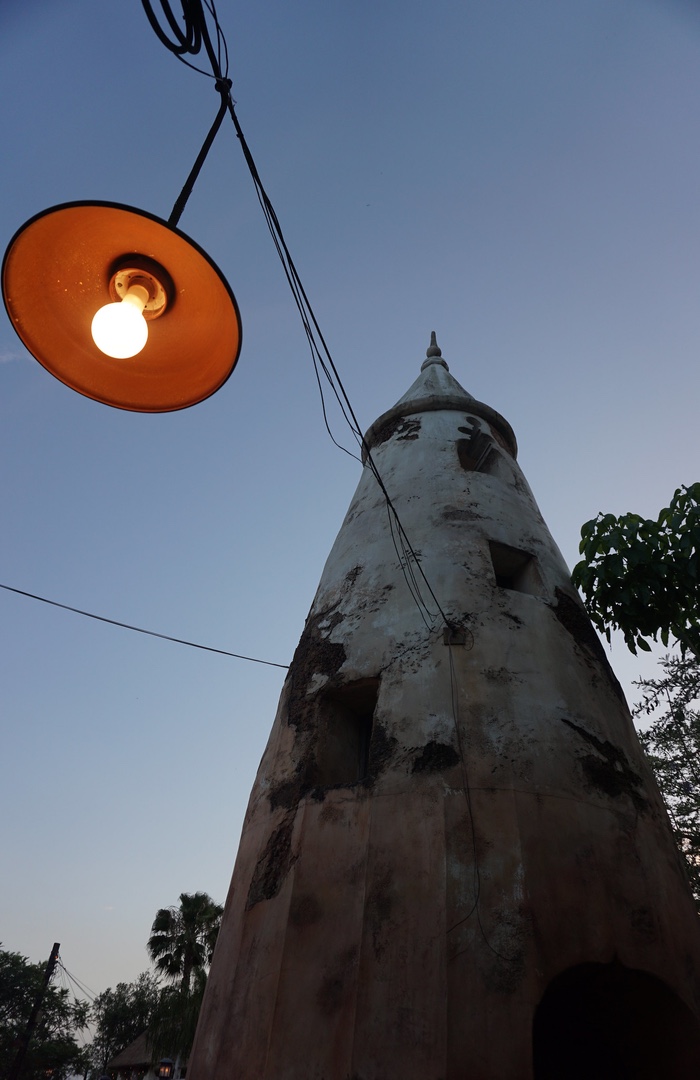 I made a very late reservation to Tusker House after a fun filled day at Animal Kingdom. I rope dropped the park and got to ride Flight of Passage first thing in the morning with only a 30 minute wait! After an early start, I explored some animal trails and exhausted myself with a lot of walking. So I was looking forward to sitting down with my family for a meal at the end of a long day. We opted to skip Rivers of Light on this visit since it’s not my favorite show and we booked a table at Tusker House about 20 minutes before the restaurant officially closed. Which left me nervous that we would be rushed out, but it was all I could get.

Check in for Tusker House is nearby the Dawa Bar. If you arrive early and have to wait a bit, this is a great bar to enjoy a cocktail and enjoy musical entertainment in Harambe. Since it was late at night, Africa was practically deserted and we were immediately escorted inside. Along the way, I had to once again stop and marvel at the great details in this park. I love the cone shaped building, nearby the entrance to the restaurant. It is somewhat inspired by the mosque seen in Old Town Mombassa.

The interior dining room of Tusker House is deceptively big. There are a lot of different rooms where you can be sat at. I always prefer this because it just cuts through some of the intense energy at a character restaurant. We were seated in the very first room outside the market/buffet area so we had a prime spot when it came to getting food. And the interior spaces in this restaurant are exquisite. A fantastic example of how Animal Kingdom is the most detailed park in Florida.

Our waiter was exceptionally cheerful. One of the peppiest Cast Members I’ve had at a restaurant in a while. You could tell he really enjoyed his job and spreading the magic but he wasn’t drinking too much of the Disney kool-aid. He read his audience right and was very sweet to my niece. 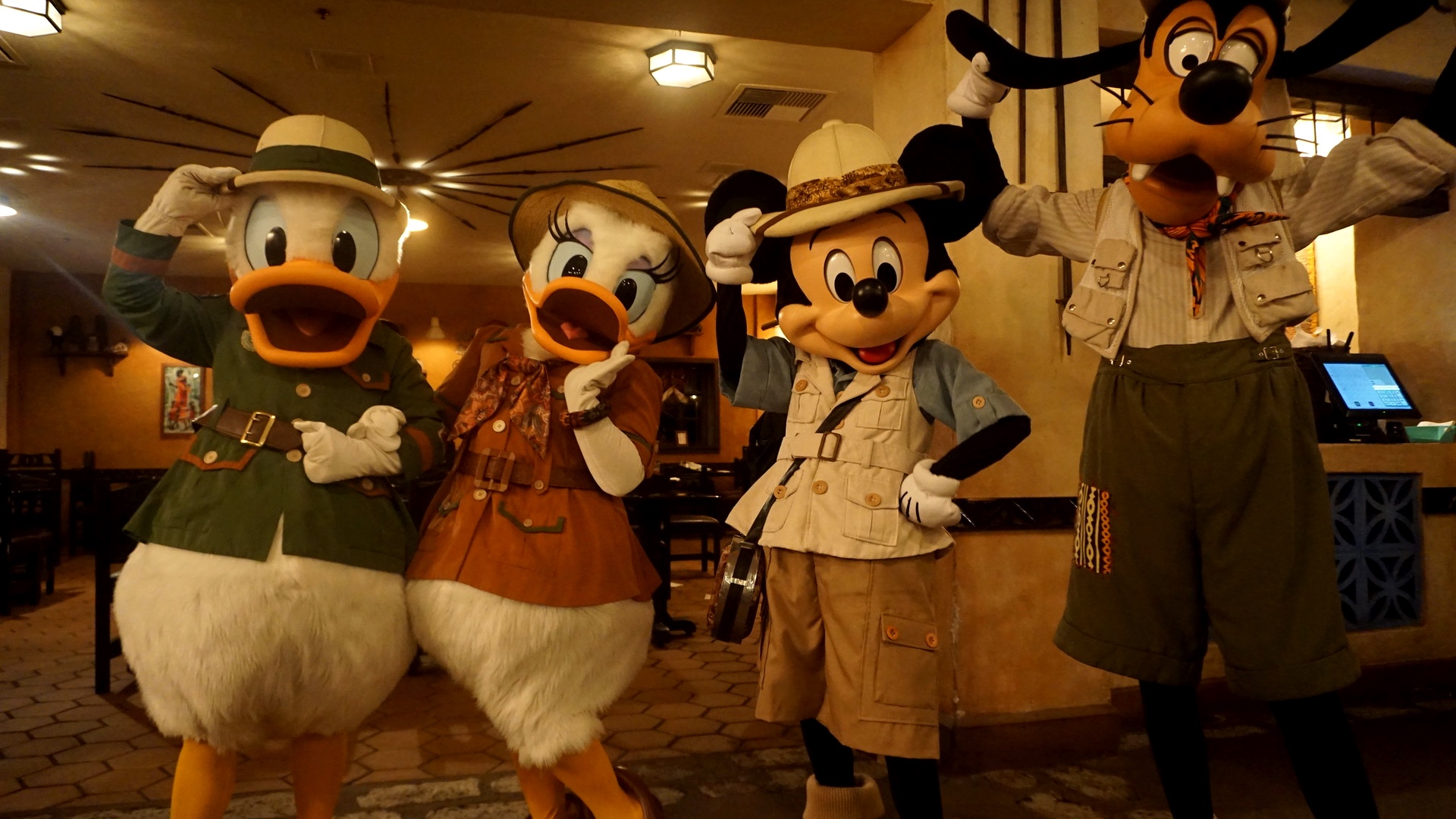 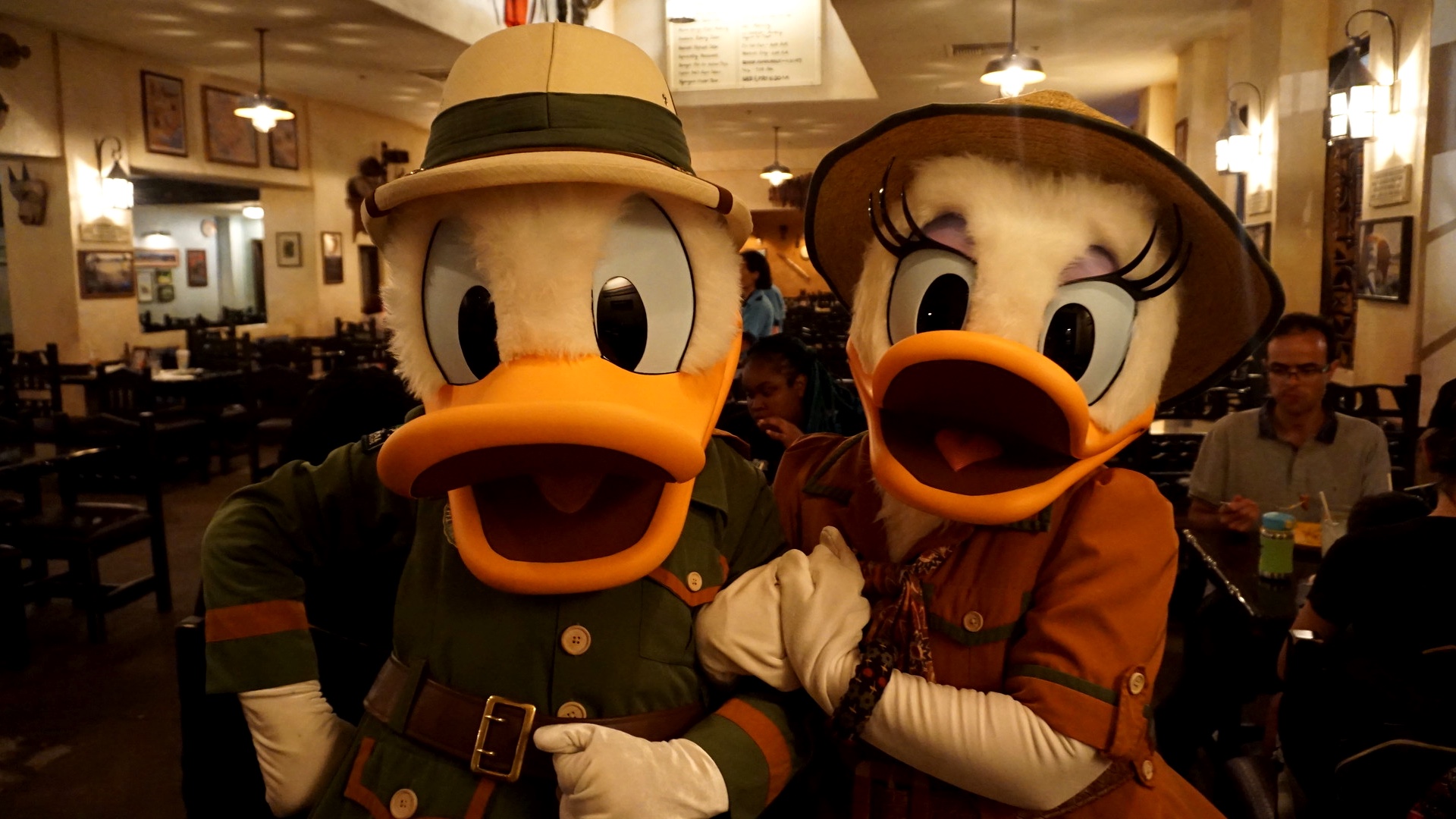 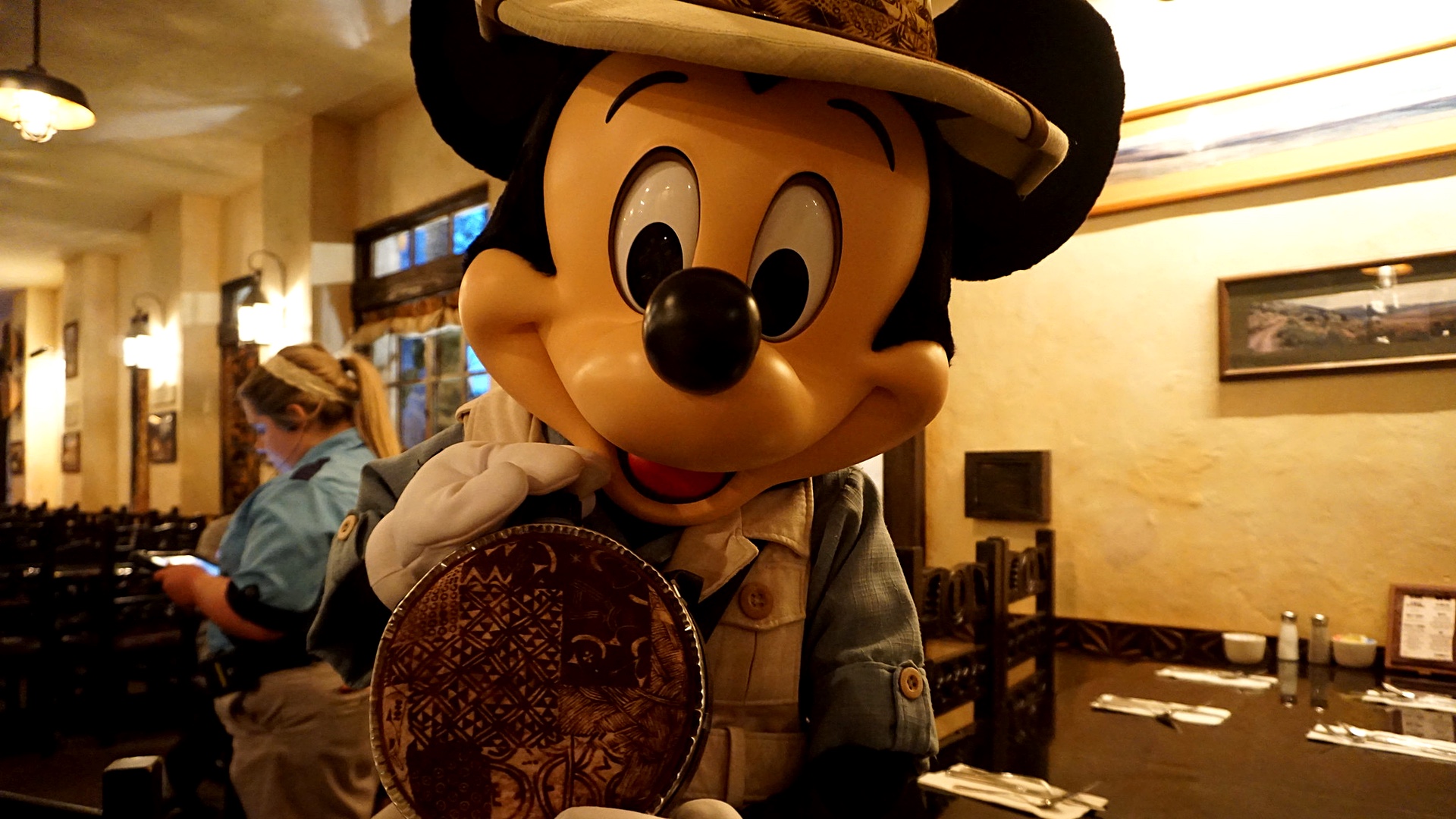 Now before I talk food, I have to tell you about a huge lesson I learned. If you dine at a less visited character restaurant at the end of the night, contrary to what you might think, you’ll get exceptional time with characters. This restaurant usually features Donald, Daisy, Goofy and Mickey all in their safari gear. Minnie doesn’t usually make appearances here; it’s basically the opposite of Cape May Cafe at Beach Club which highlights Minnie and sadly Mickey is absent.

We first met the ducks! We had the great opportunity to meet Daisy and Donald together. I adore Daisy, she is always so sassy! You would think my niece would be jaded with how much she visits the parks, but I think she was particularly excited to get the double whammy of characters at once. They admired here little character figures also dressed in safari gear.

After a visit with Mickey and then Goofy, it was time party. Like at most character restaurants, everyone gets to join in on a little dance party around the dining room. But this one was extra special since there was NO ONE in the place. There were only about 15 other guests dancing along and that’s it. It felt like a private party. 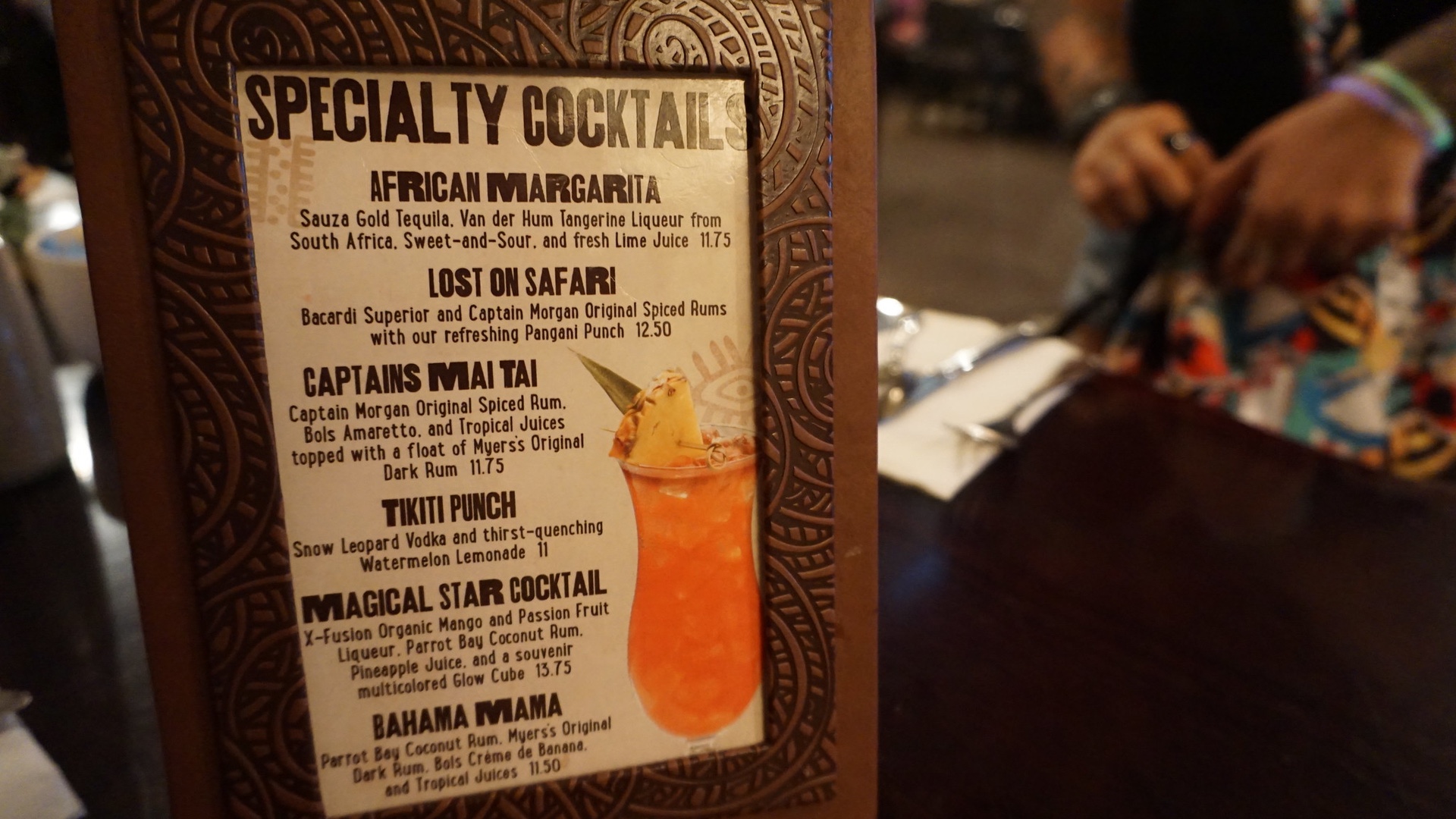 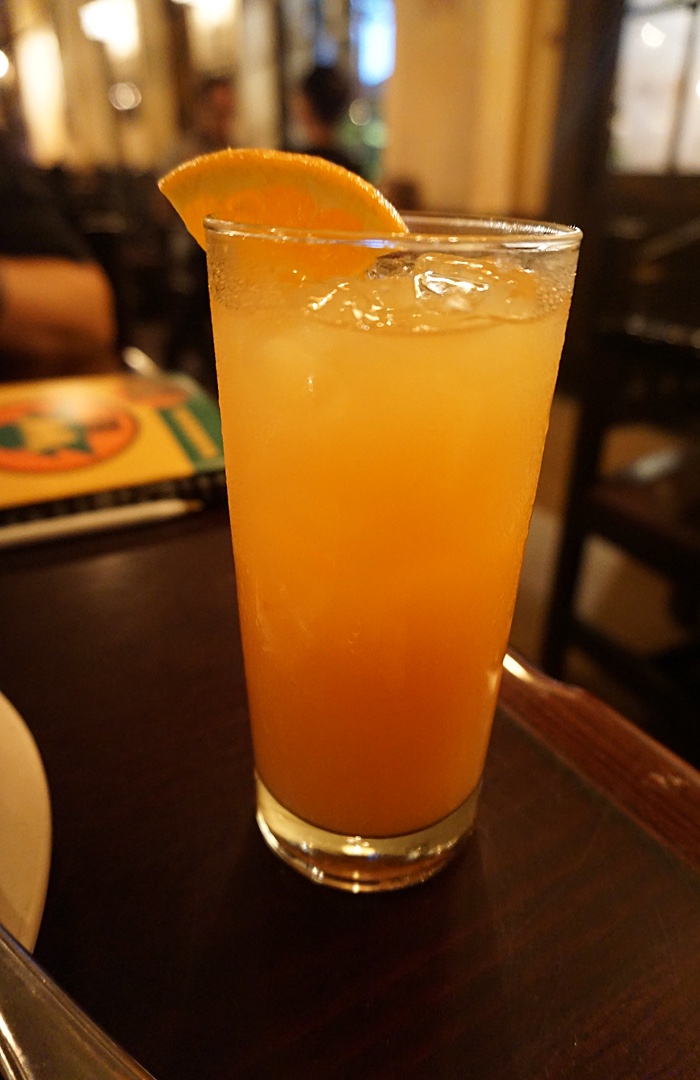 But alas, let’s talk food! My Lost on Safari drink was excellent. It was a mixture of Bacardi Superior Rum and Captain Morgan mixed in their famous fruit punch. It wasn't too strong, or sweet for that matter, and a nice refresher for the end of the day. Then it was time to hit the buffet. This buffet is located in its own room and themed to look like an exterior marketplace area. Very reminiscent to the marketplace in the Morocco Pavilion at Epcot. It was a shame that I was here so late and felt I had to get a move on. I didn't get enough time to take in all the details. I don't think I've seen a character restaurant this beautifully themed before.

Tusker House has a fantastic variety of food, and good options if you're vegetarian. But of course, we start with bread. Where you already see a good variety in contrast to the typical Disney restaurant. They offered naan bread, pita breads, and such much more! There’s also a nice amount of side spreads that go well with the bread or just as a side to mix with other ingredients. There was a tomato hummus, classic Greek hummus and several chutneys. There is a build-your-own salad section and more interesting options like a Mediterranean lentil salad or chickpea salad. 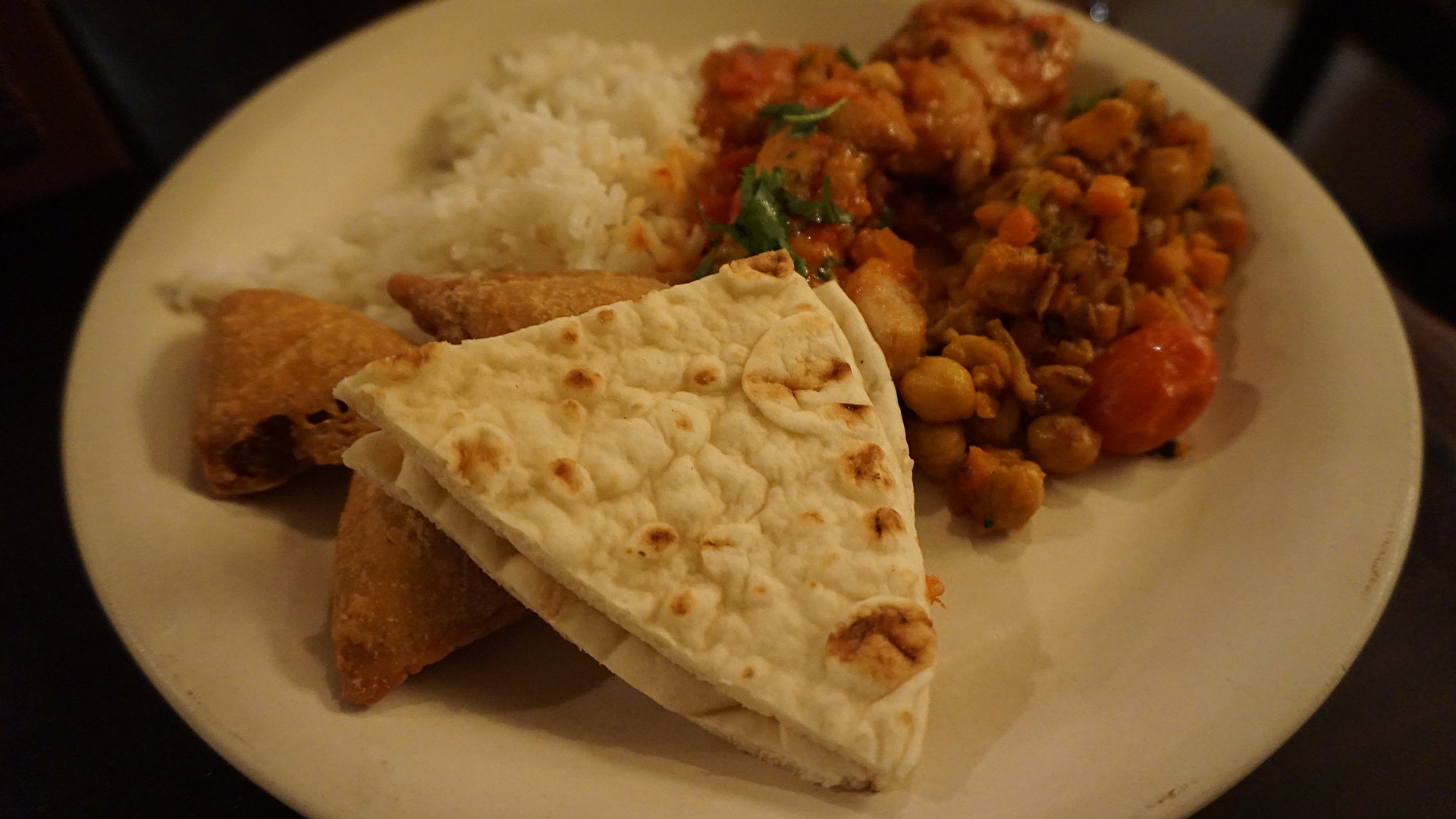 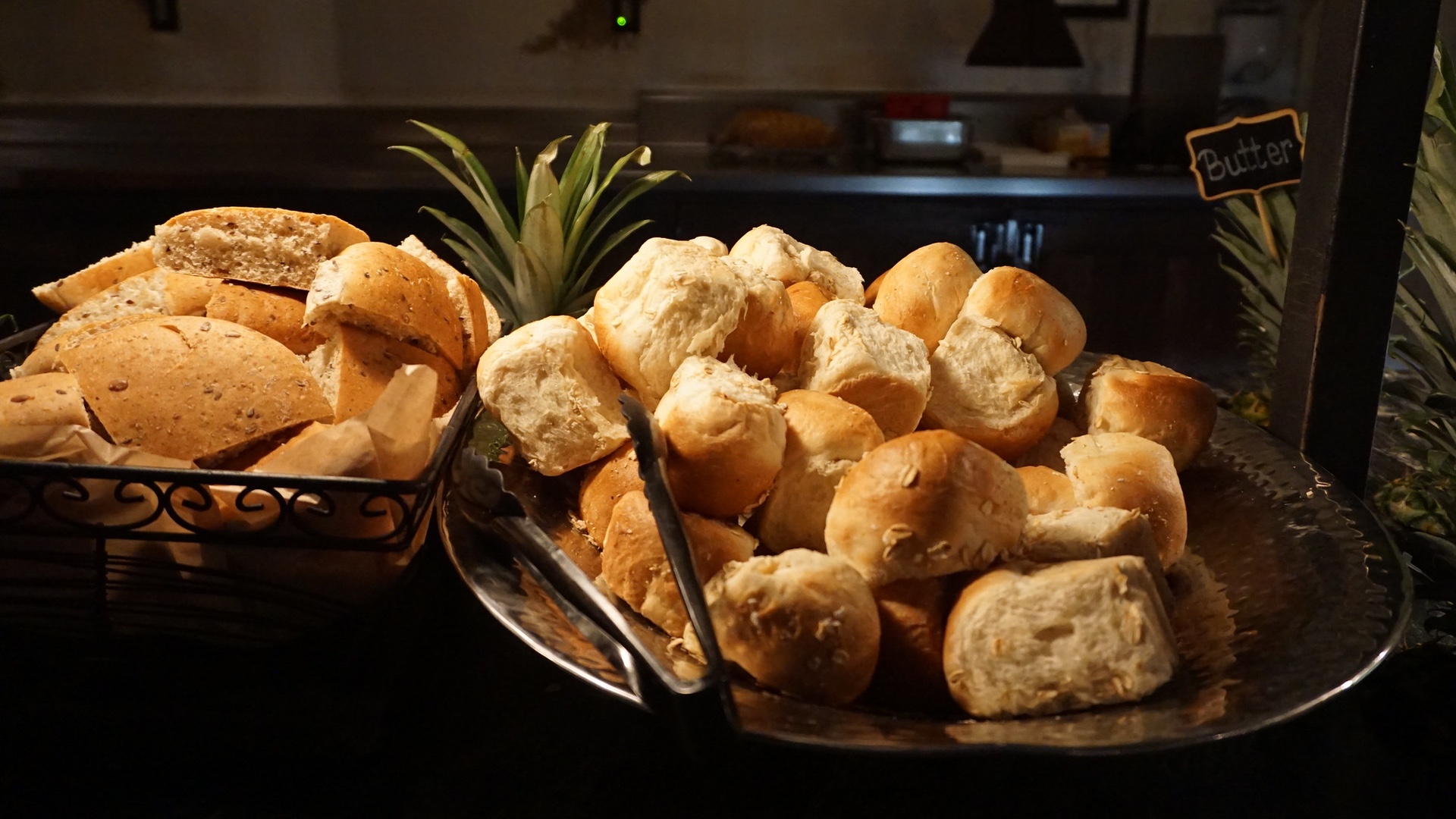 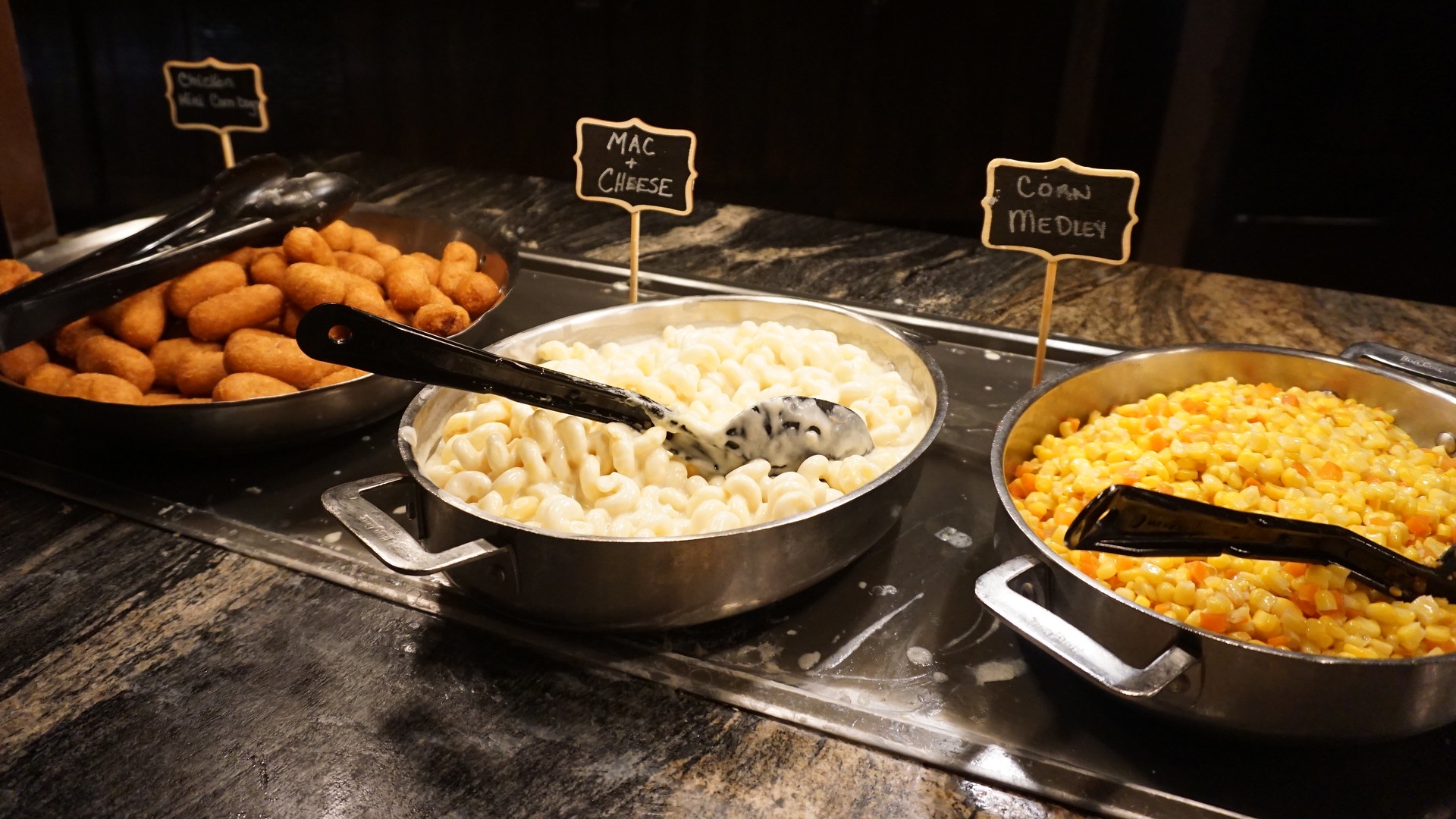 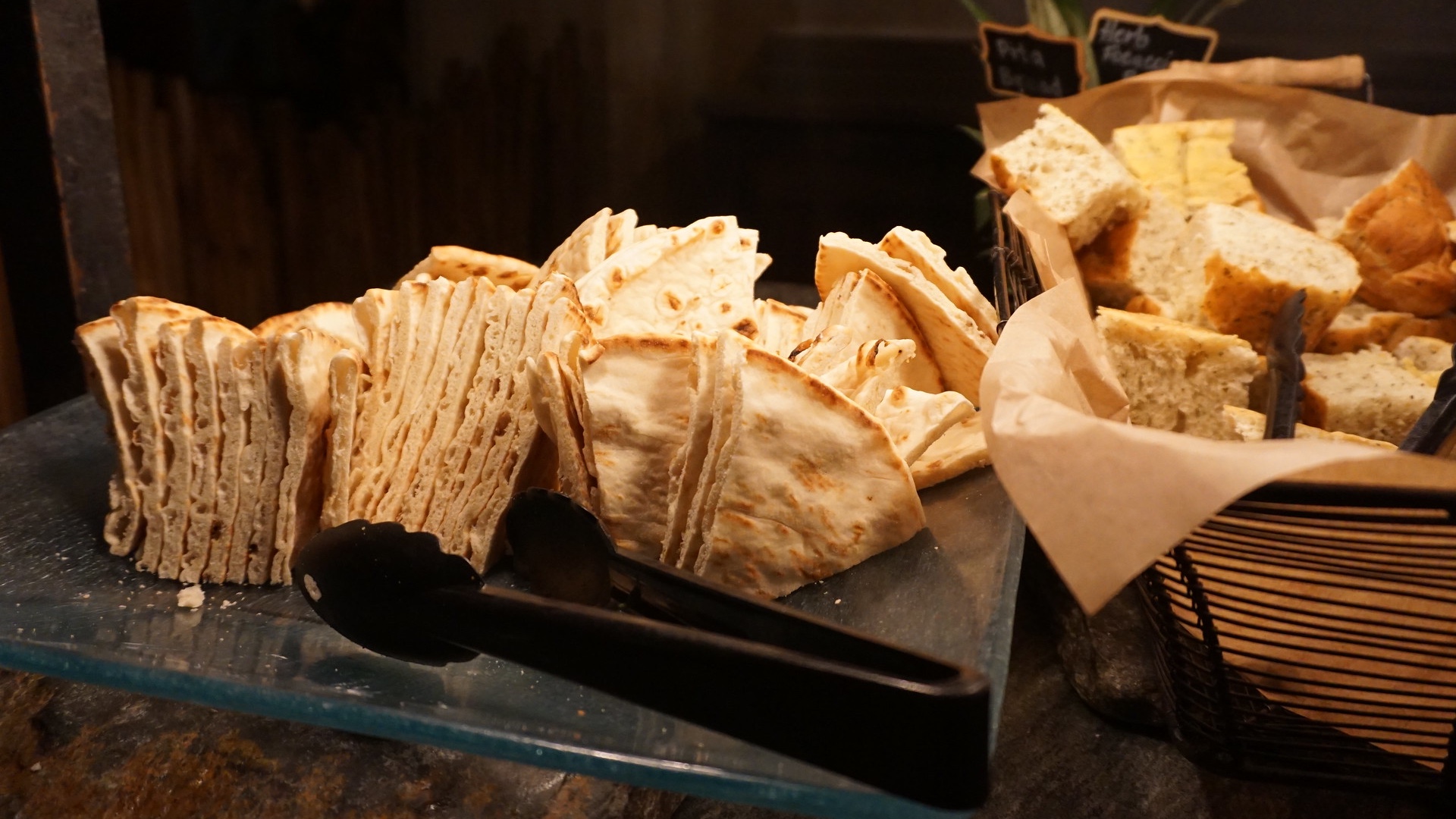 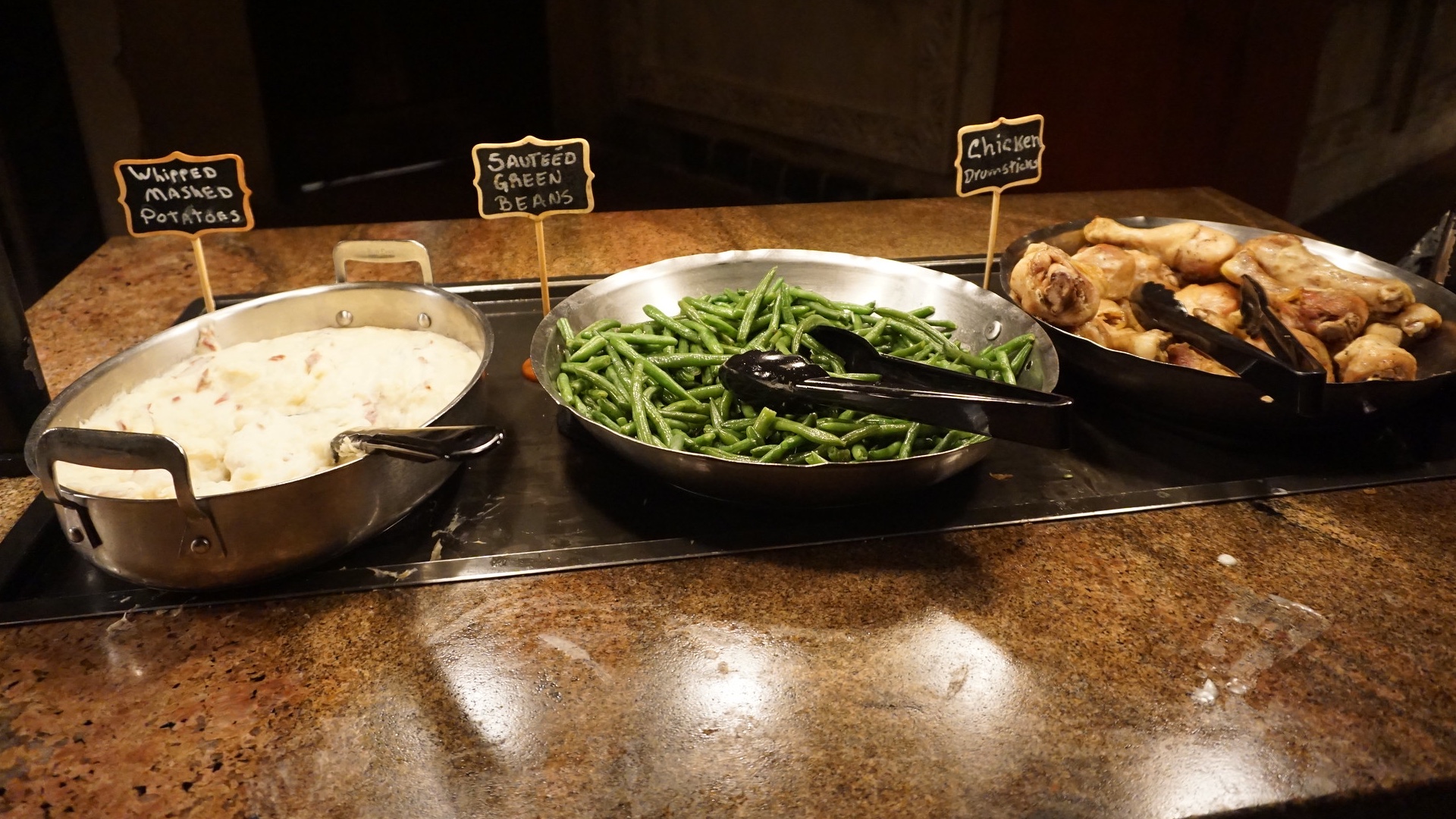 In terms of mains you can one of two ways. You can be safe and have things like rotisserie chicken with green beans and mashed potatoes. Or you can have several curries, as I did. You can choose between a vegetable tandoori curry and spicy coconut shrimp curry, or my favorite, the

Cape Malay Chicken Curry. It was full of flavor, not to spicy and just a breath of fresh air from the norm. There is a carving station featuring pork, but as I mentioned I tend to skip these meat stations. There‘s an even mix of familiar dishes, spicy ingredients and exotic cuisine. I especially loves the array of side dishes. You can enjoy a honey-roasted carrot mixture, vegetable samosas, plantains, collared greens and and pigeon peas and rice to name a few. For kids, there are safe choices like mac 'n cheese, corn dogs and a cord medley.

Then of course there is dessert. Tusker House is all about petit sweet dishes. I’ve seen this at many character meals, but more so here. There was an excellent chocolate tart topped with some crispy chocolate pearls. A traditional shortcake topped with raspberries and some interesting mixed nut chocolate bars. The desserts were good, however I've seen more elaborate and interesting options at other character meals. This is a restaurant where it's better to fill up on the savory main dishes and just have a simple sweet ending. It's not like going to Chef Mickey's where there is a huge array of desserts and a soft serve ice cream station. 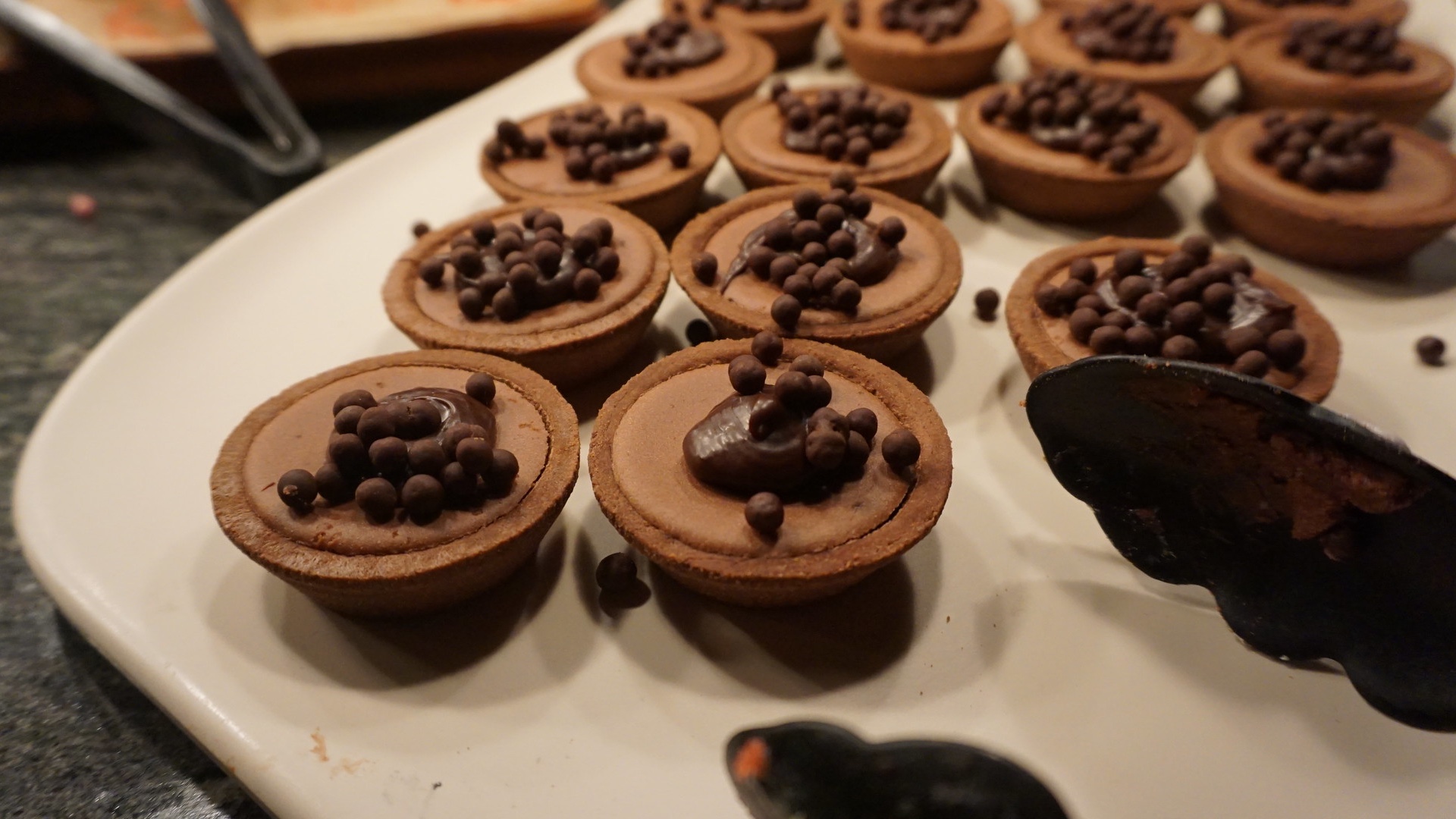 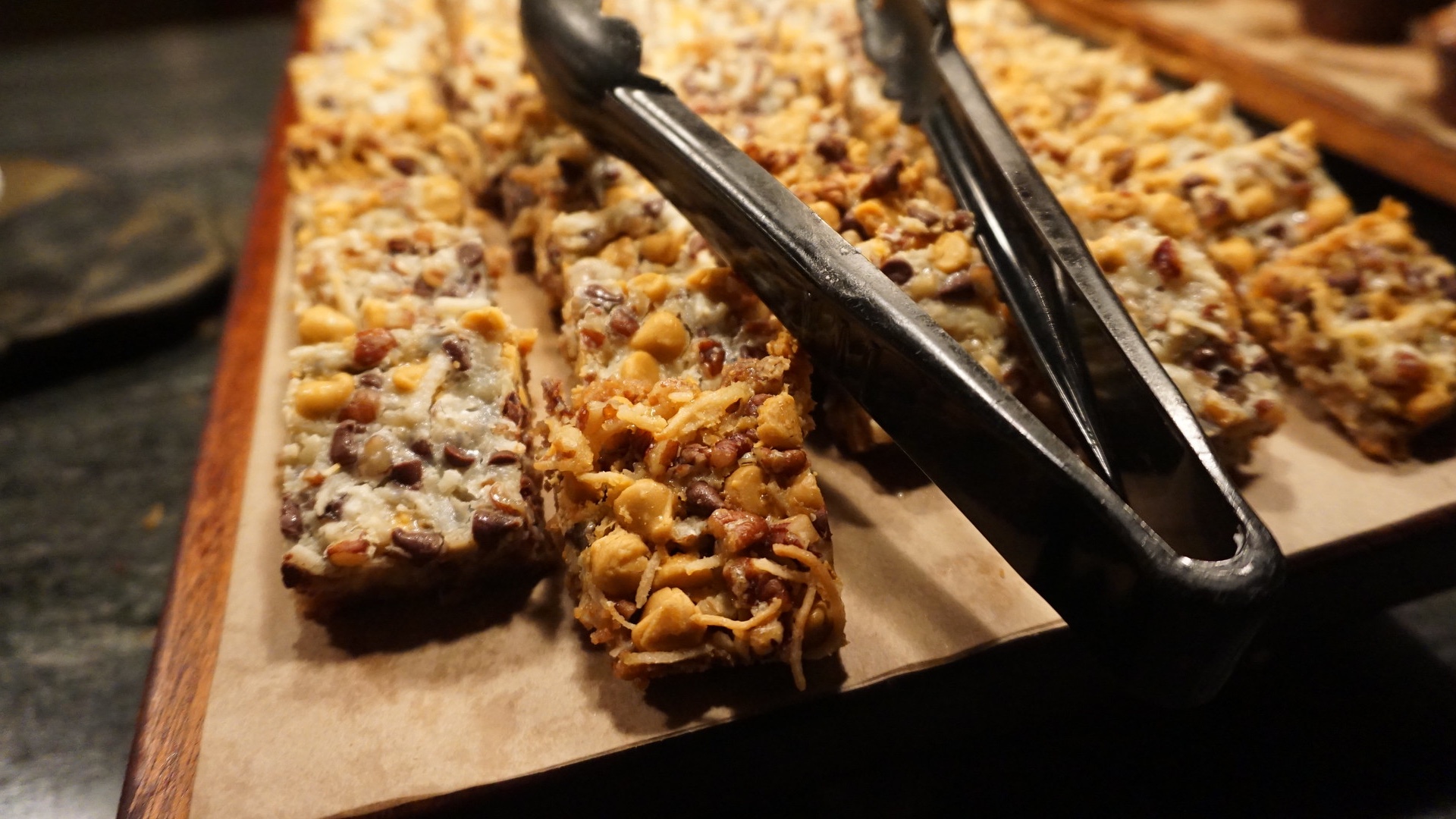 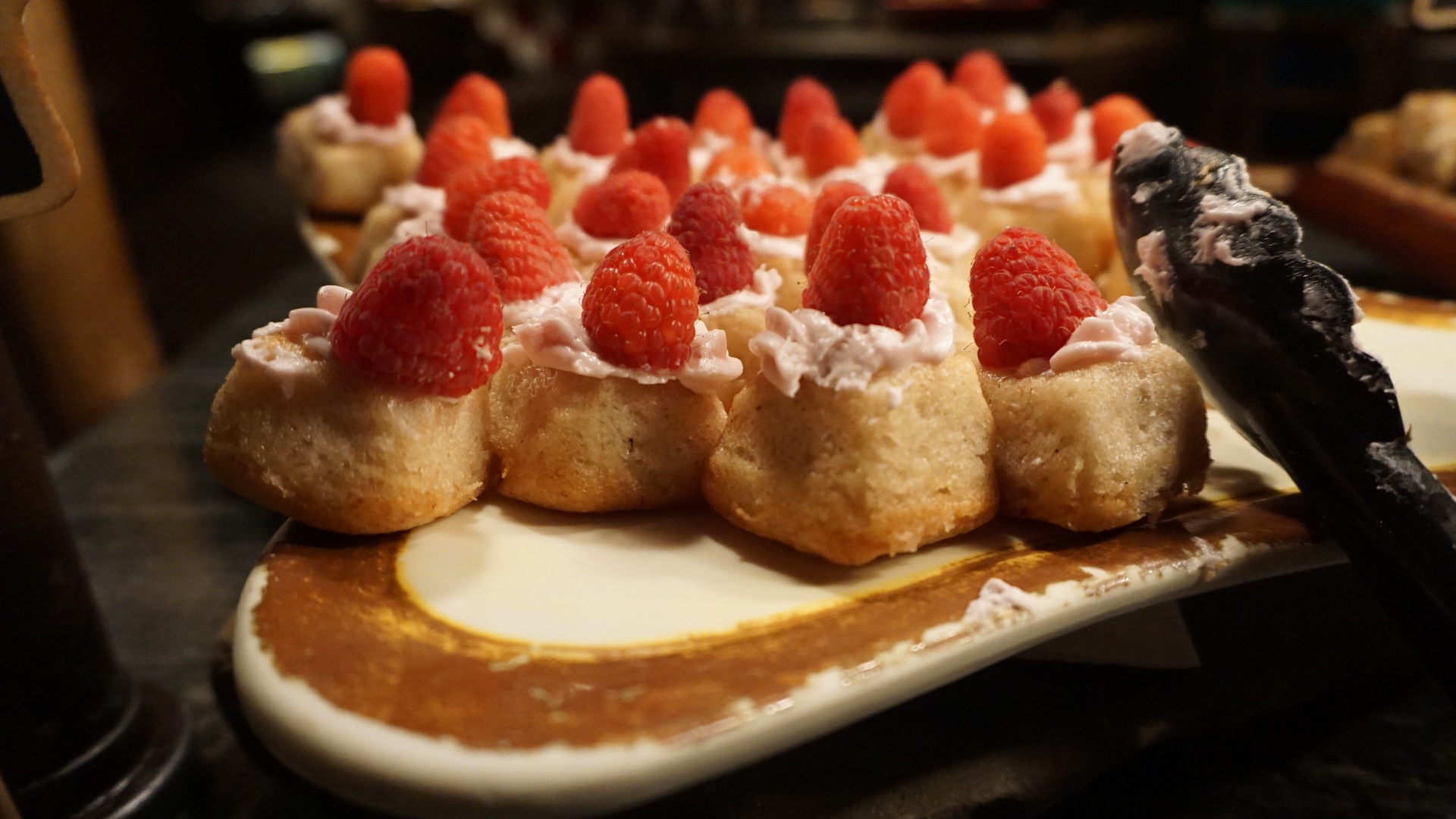 Now we get to the most important part, price. Lunch and dinner at Tusker House Restaurant is priced exactly the same; for adults it will cost you $52 and for kids 3-9 it will cost $31. This price covers your food and all non-alcoholic beverages. This price is on par with almost all character meals at dinner. This is the same pricing that you will see at Hollywood & Vine over at Hollywood Studios and Crystal Palace at the Magic Kingdom. If you visit Tusker House for breakfast, again the price is on par with most character restaurants around Walt Disney World at $23 for kids and $38 for adults. Like I said at the beginning of this review, breakfast is always more cost effective when paying out of pocket. In this case, I was visiting Disney on the standard Disney Dining Plan. As I've stated in my Dining Plan videos, you always want to visit a table service restaurant where you'll surpass the $41 mark for adults and $15 for kids in order to save money on the plan. In this case, I felt that I made out like a bandit considering I ordered a drink on top of that. This meal would've cost me in the region of $65 when you add it all up with tax and everything. Therefore, once again I reiterate, visiting character meals on the dining plan is extremely wise. However, this was one of the first times I left a character meal at dinner time, confident that I could recommend the place even if paying the out-of-pocket price tag.

In the end, Tusker House did live up to my expectations and then some. I know that I was lucky in that I got to experience the restaurant at an extremely quiet time which led to exceptionally character time. But I will say that many other Disney fans have expressed similarly good interactions at this restaurant. In terms of ambiance, this is some of the best Disney Imagineering inside a restaurant. But I think that is to be expected throughout this park. But most importantly, the food was exceptional. Tusker House is great for vegetarians or crowds looking for a big departure from cheeseburgers and typical American food. I am sure younger couples with kids who are accustomed to eating different styles of cuisine will be pleasantly surprised at this restaurant. I can confidently say, that of all the characters meals I've experienced for dinner, Tusker House is top dog when it comes to food quality and variety. It is a restaurant that I would gladly go to again.