FOOD REVIEW: Dinner at Crystal Palace at the Magic Kingdom

Sandwiched in between Main Street U.S.A. and Adventureland at the Magic Kingdom sits the Crystal Palace. This has been a longtime fan favorite at Magic Kingdom and one that I've been excited to try for a few years now. During a girl's trip plus David vacation, my sister, mom and almost three year-old niece booked dinner at this restaurant; a mealtime that we don't typical do for character meals. We are the type of family to book character meals for breakfast. I've always felt that the price at dinnertime can get pretty steep. Therefore, we usually opt for breakfast because it's slightly cheaper and will fill us up to the point that we will skip lunch. A big breakfast means that a snack or two usually holds us over until dinner time. But this trip was all about changing up the norm, so we book an early dinner at 6:30pm at Crystal Palace.

First of all, I must take a minute to talk about the architecture and design of this restaurant, because it's one of my favorites. My research has led me to conflicting statements by Disney fans in regards to what real-world landmark inspired this building. I've come to the conclusion that Crystal Palace most resembles the Conservatory of Flowers located inside Golden Gate Park in the city of San Francisco. This building, along with other similar structures, fits the setting of Main Street beautifully. It's a Victorian-era building made almost entirely out of glass windows. The style of this structure also perfectly transitions to Adventureland. Which also begins with a series of Victorian-era buildings to reflect the colonial period when the British empire was expanded to places such as India. So this is a great example of Disney details working at their best. Crystal Palace is more than a restaurant. It also tells the architectural story of not one but two lands seamlessly.

When you first step inside Crystal Palace there is a beautiful central courtyard of a few floral arrangements along with some cute topiaries of the characters from Winnie the Pooh. Everyday at Crystal Palace is Friendship Day, and all the characters and guests are celebrating. When we arrived at the restaurant, it was exceptionally busy. I suspect this is standard protocol at Crystal Palace because I know it's popular. Our host gave us a brief tour of the restaurant explaining the layout of the buffet and sat us on the right wing of the restaurant towards the very back. Just as Tigger was arriving to the table.

After a quick first round meeting Tigger and taking some pictures, it was time to dig into some food. This buffet at dinner serves up a pretty impressive range of food items. There are two sides to the buffet, each exactly the same. These two outer legs meet at the center with a carvery station. You'll then notice an island across to the center of the buffet, with scrumptious dessert options.

The very start of the buffet offers a kid's section called Pooh's Corner. On this particular night it featured chicken tenders, macaroni and cheese, steamed corn and peas and grilled chicken drumsticks. All of these items are standard Disney kid's meal items that I've seen and tasted at several locations. Then we move to the adult buffet. Every section has a range of items to choose from. The bread section featured 6 different types of rolls; kaiser, spitzweck, sesame and sunflower rolls along with garlic parker house rolls and herbed focaccia. (In my best Oprah voice, 'And you get a bread roll, and you get a bread roll and you get a bread roll!) The range of options continue with salads. There's a typical caesar and mixed green salad with a variety of dressings. As well as edamame salad, Mediterranean pasta salad, Moroccan couscous salad, Greek-style tomato salad and the cucumber and red onion salad. 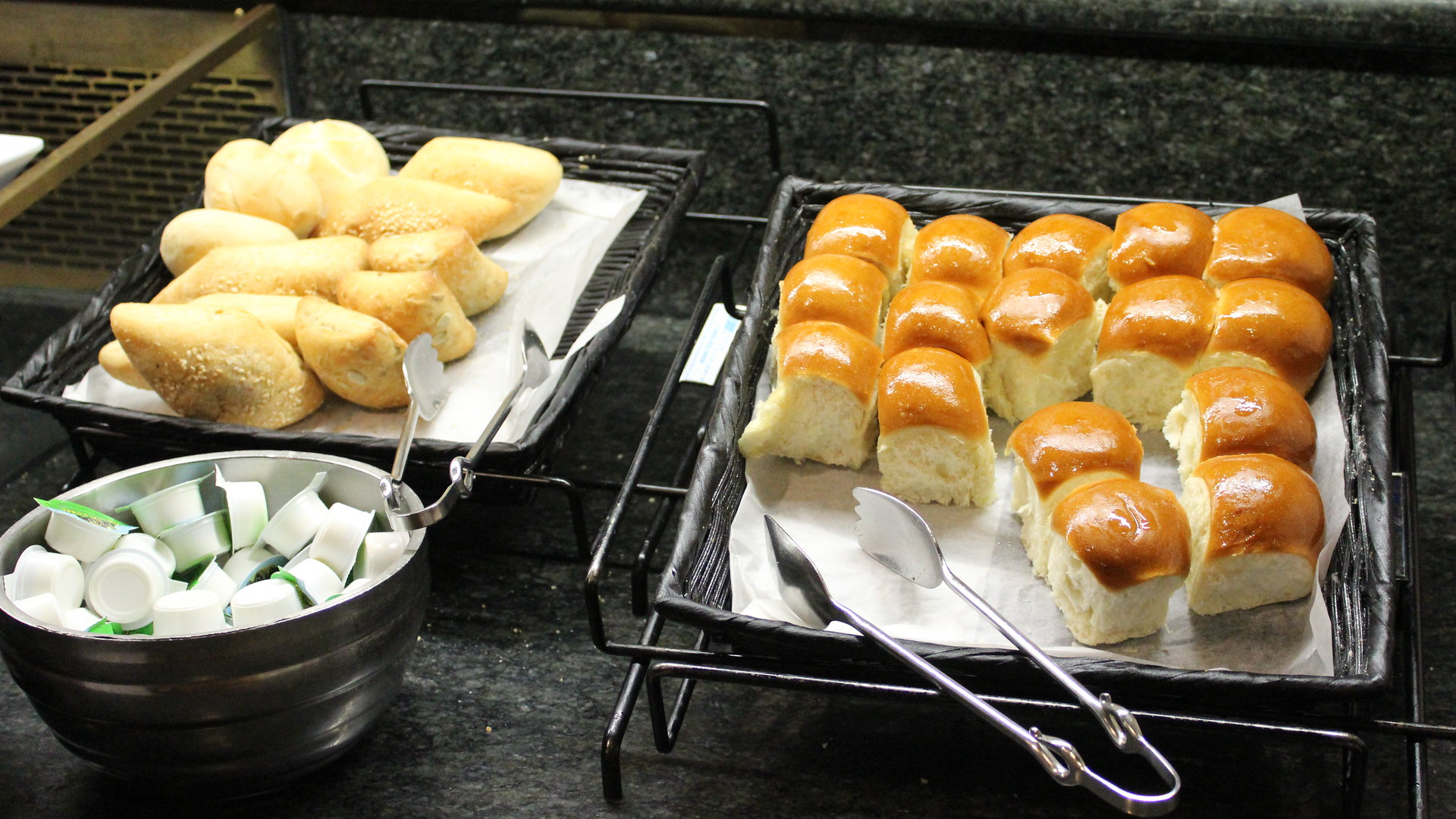 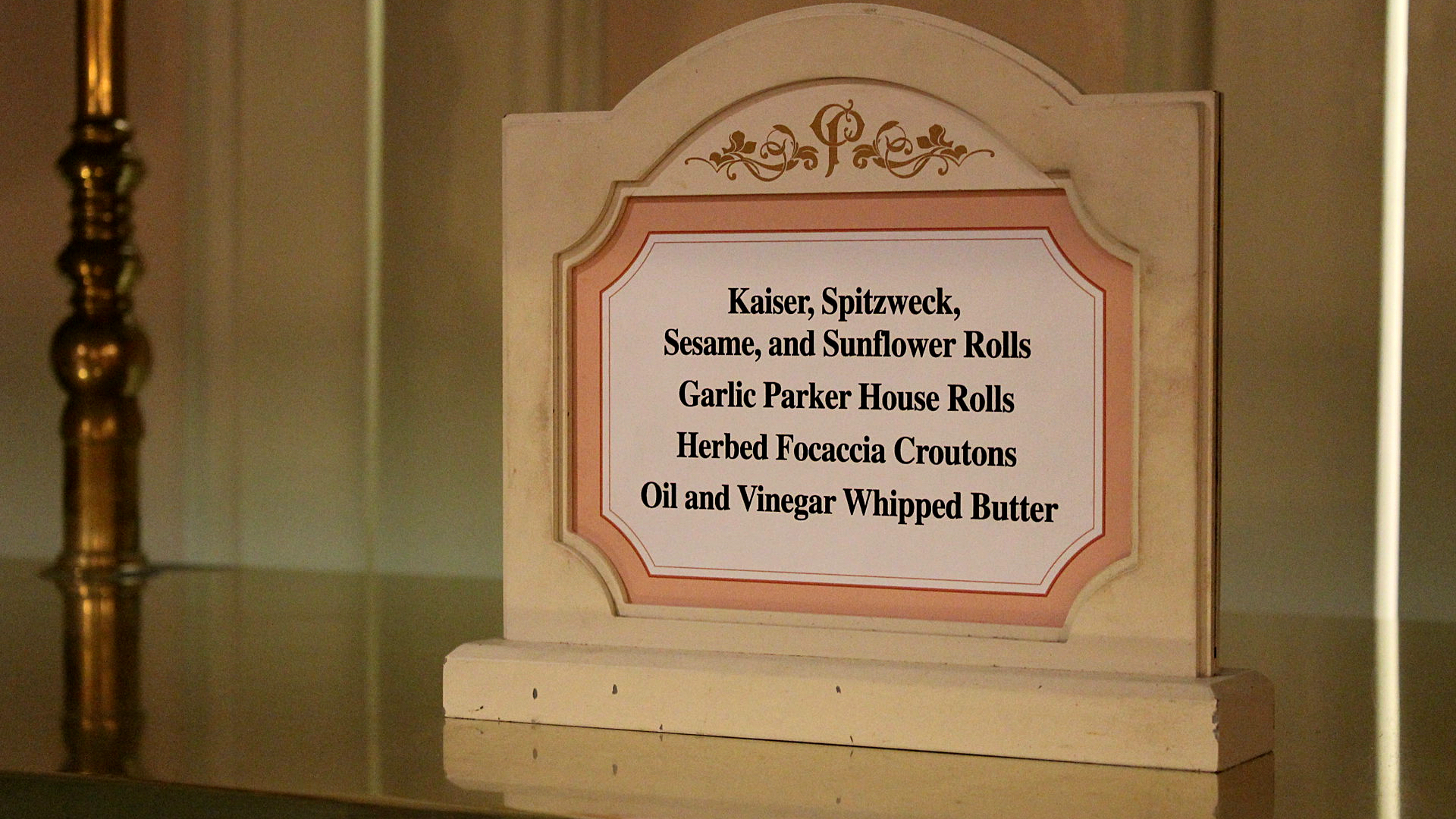 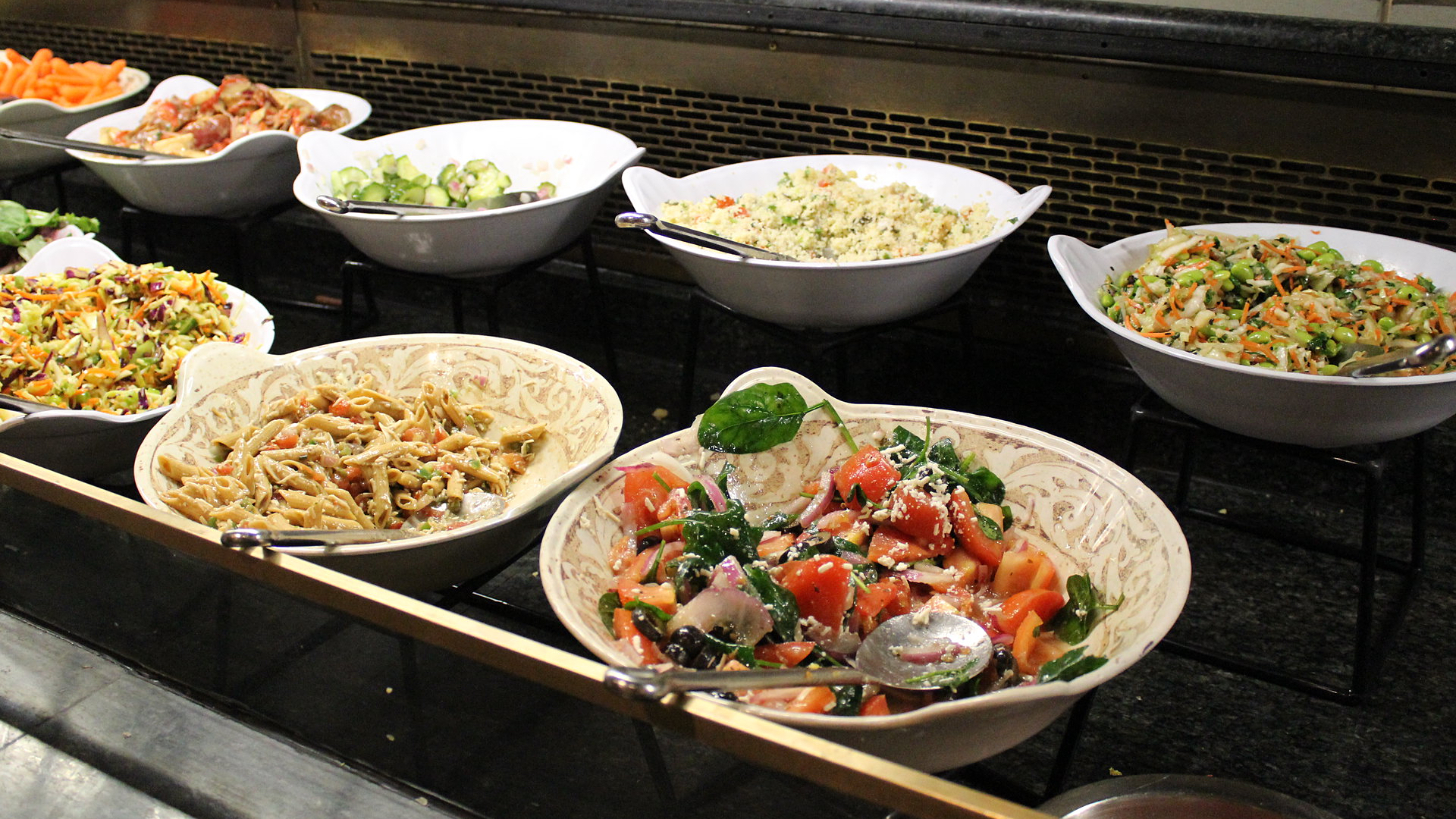 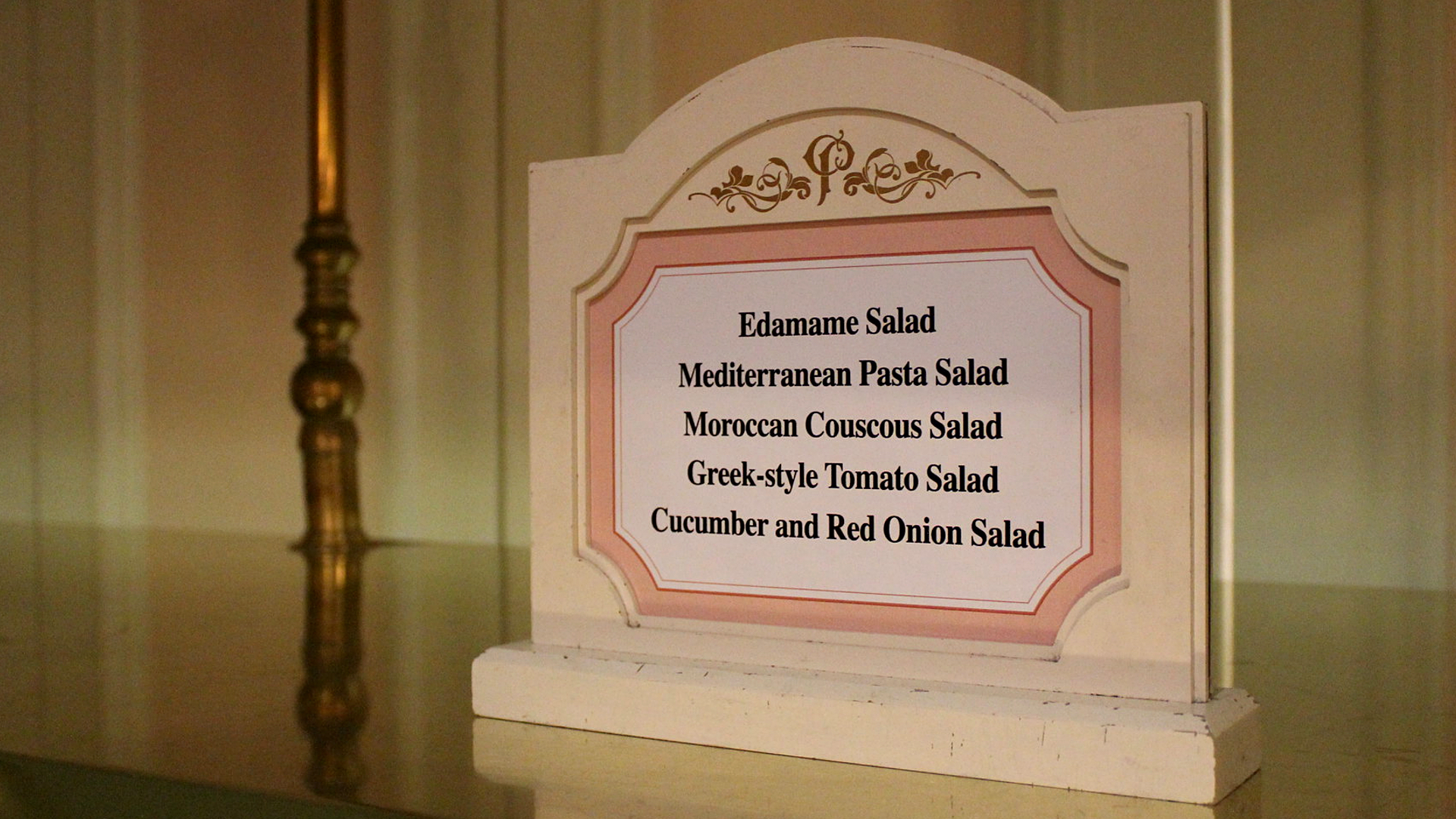 We then transition to the heartier food items with the main course and a plethora of side dishes. The sides felt like Thanksgiving which included home-style mashed potatoes, broccoli and cauliflower mix with garlic, fire-roasted cornbread, sautéed green beans, steamed rice with vegetables, banger sausage, honey-glazed carrots, roasted brussels sprouts and oak-grilled rotisserie chicken. Followed by jambalaya, parmesan cheese pierogi and a vegan pesto pasta. Then you get to the main course. First of all there were two fish options; a honey-soy glazed salmon and beer battered pollock. At the central carvery station there a roasted strip loin served with a demi-glaze and horseradish cream and a peach BBQ glazed pork with a fire-cracker peach chutney.

As much as I would like to tell you I tried everything, I only got to taste and sample several items. I opted to skip bread and salad to save room for other dishes. I did try a bit of pasta salad, which was fine but nothing life-changing. I've come to the conclusion that once you enjoy bangers and mash in the UK nothing beats it; a good old Cumberland pork sausage in England is the best in my opinion. The sausages here were just alright. Their temperature was not hot enough and I feel that American sausage has a strange texture to it. Like at Thanksgiving, the side dishes made my meal an improvement. I especially loved the cornbread! The sautéed green beans were perfectly crisp and you can't go wrong with mashed potatoes. 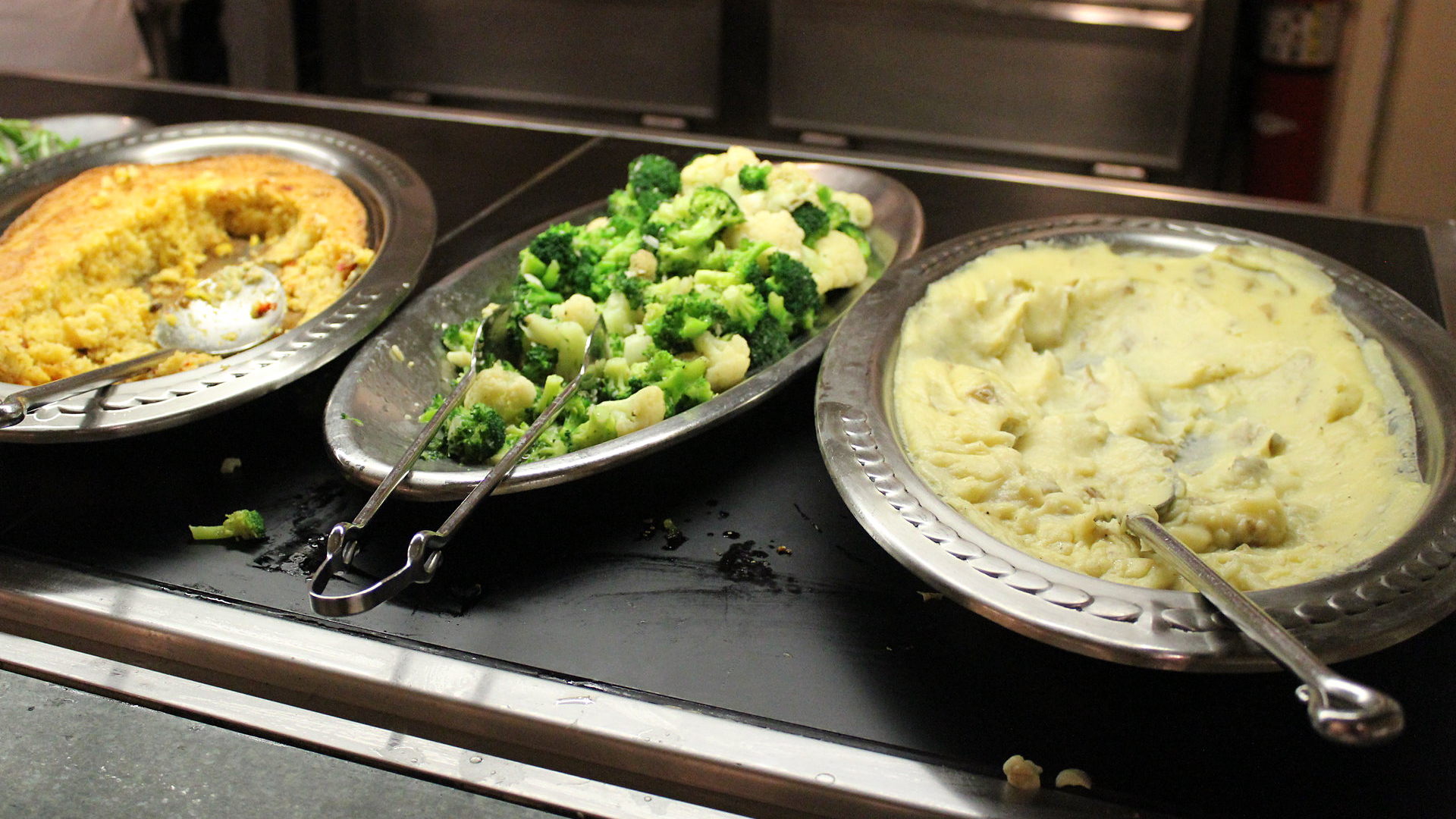 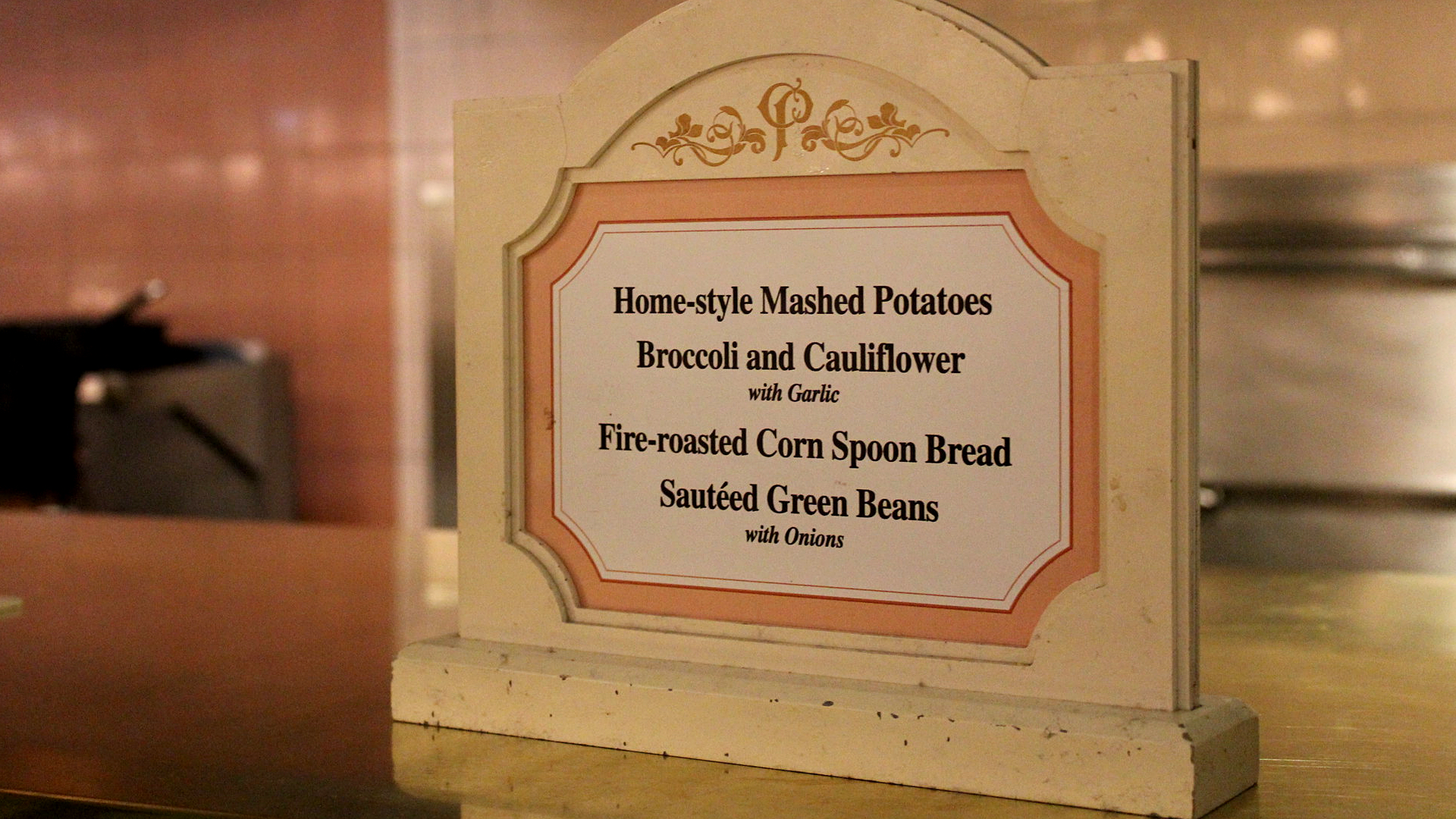 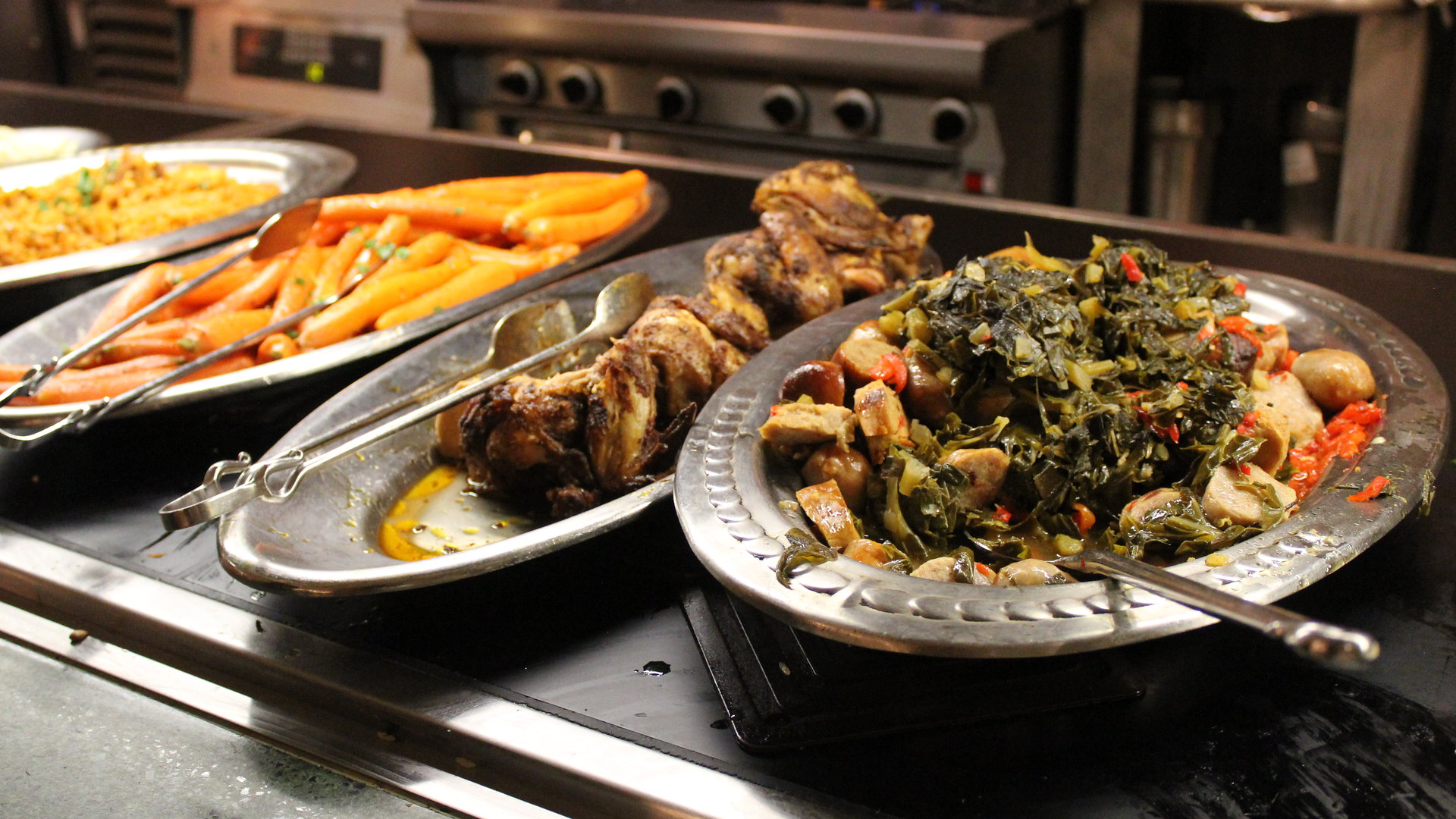 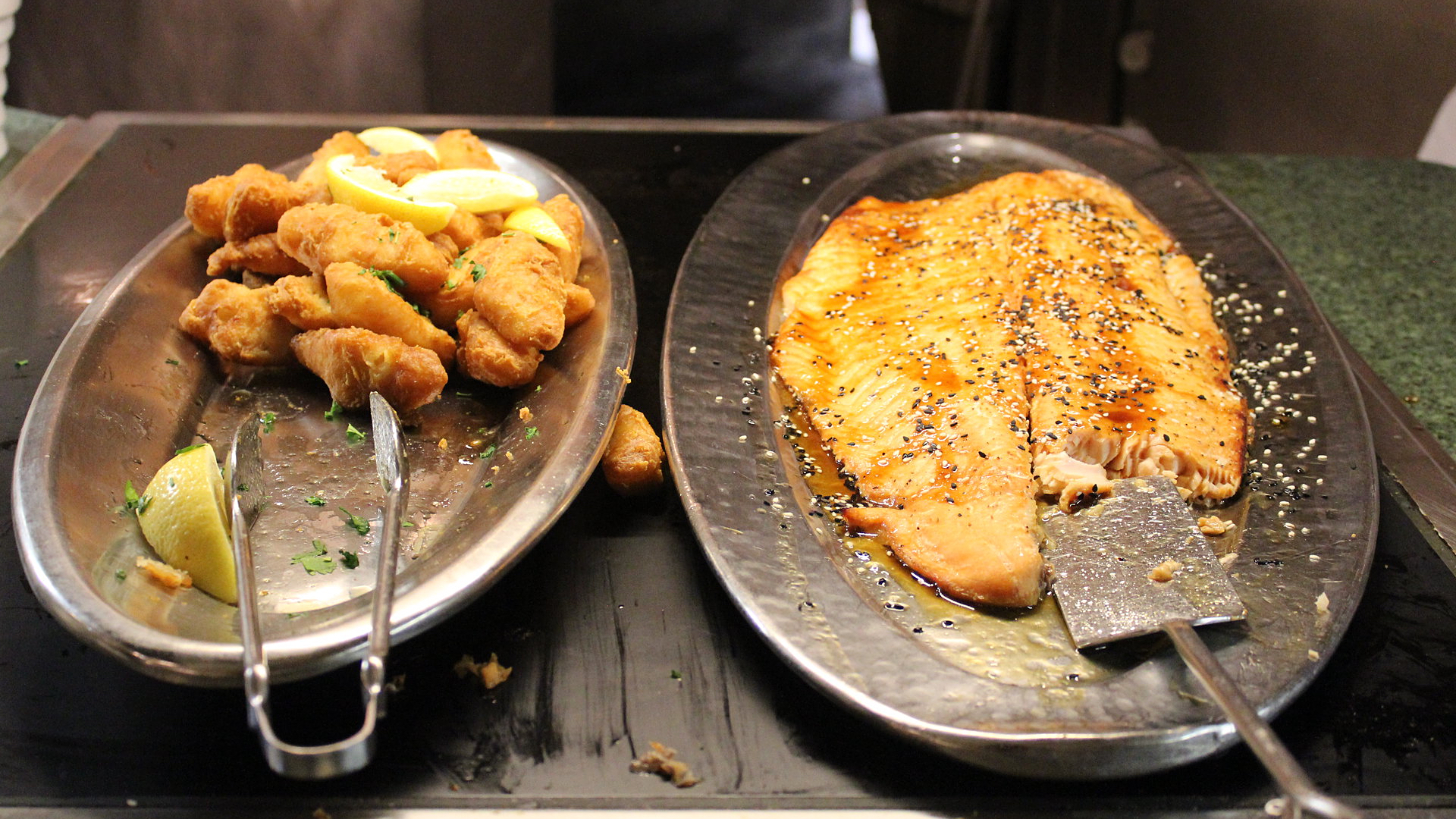 I am not a huge fan of walking up to a meat station and being served a slab of meat. There's something about it that grosses me out, but I had to try each of the mains here. The roasted strip loin was fine. It was decently tender and the horseradish sauce gave this an excellent, spicy kick. Sadly the BBQ pork was a disappointment. I was expected a mixture of interesting flavors with the sweet peach glaze, but it didn't measure up. Once again, the meat was tender enough, but a little bland in flavor. Luckily, dessert was excellent. 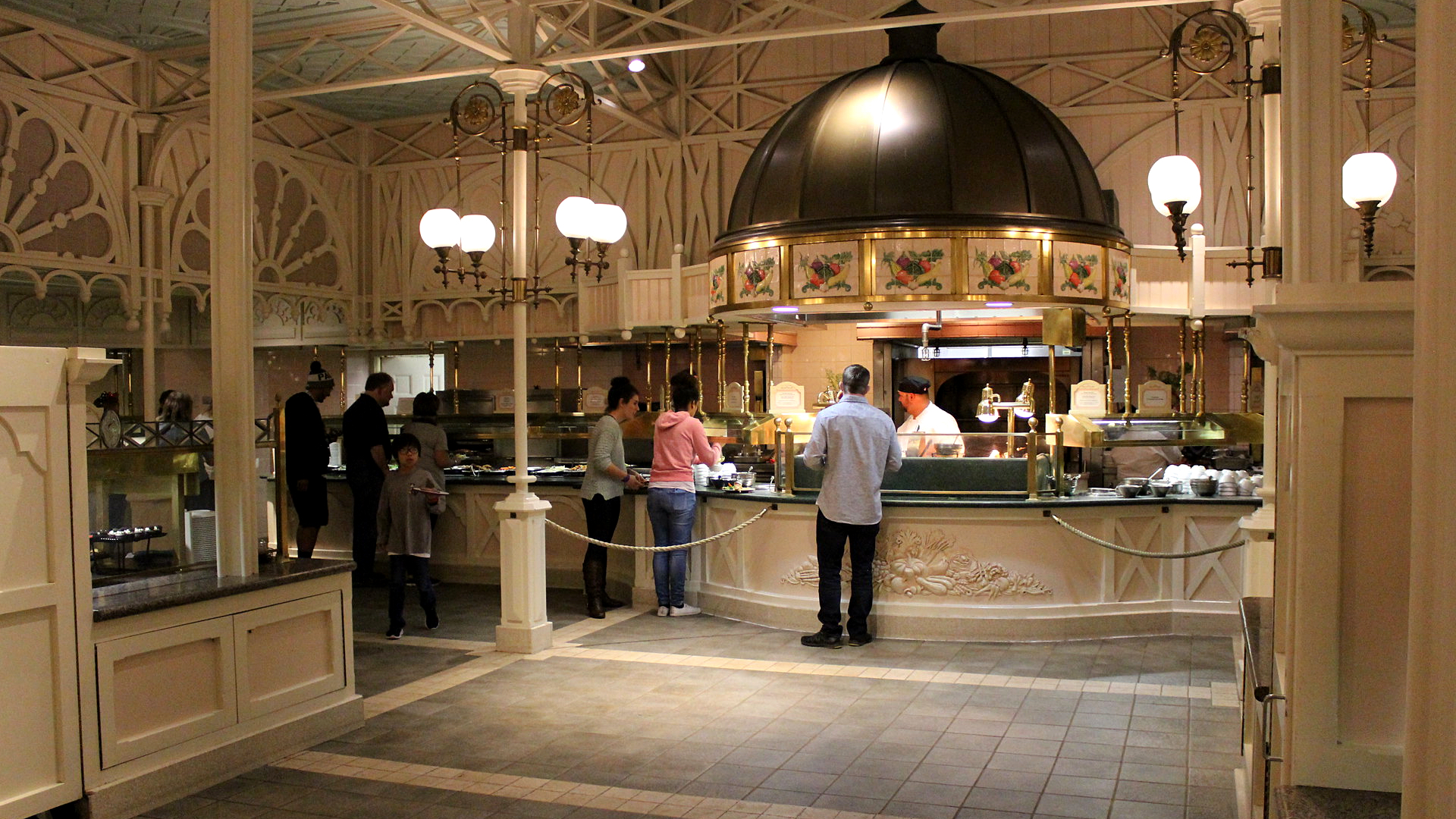 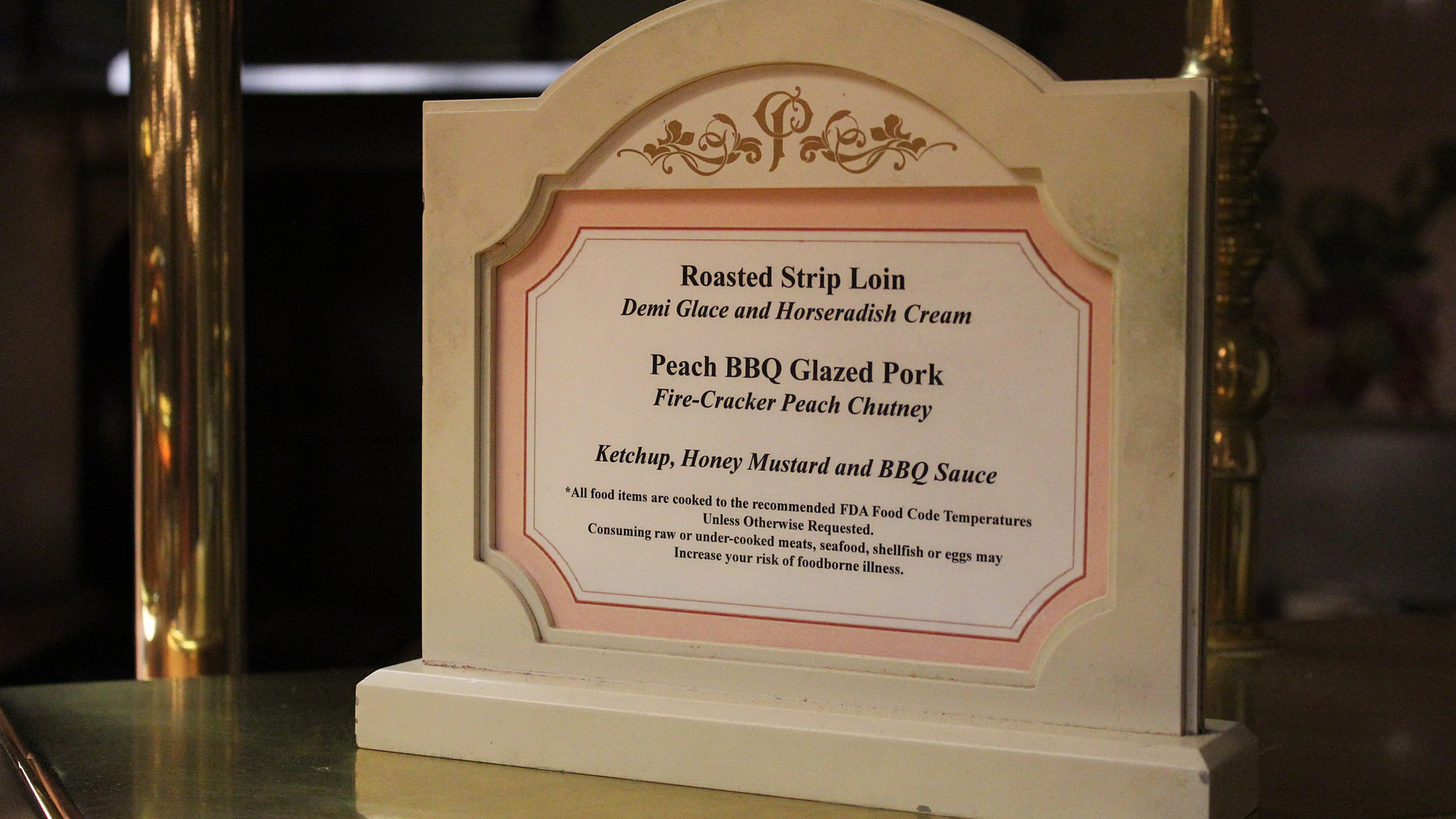 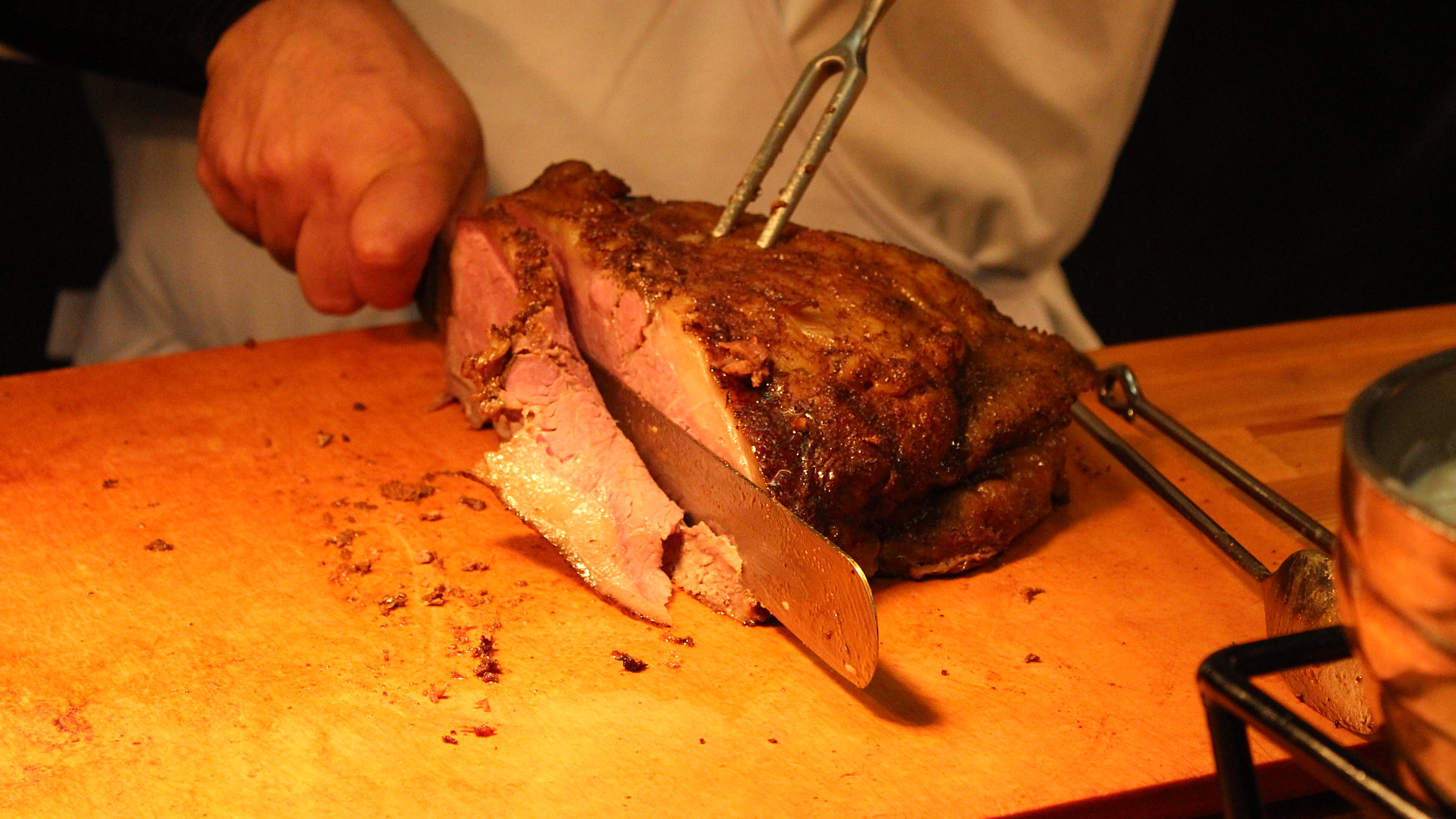 Crystal Palace serves up a fun collection of mini-cakes and desserts as well as soft-serve ice cream. One interesting dessert was the strawberry-basil panna cotta. It wasn't too sweet, since there's no added sugar, and the basil brings an interesting mix of flavor. It is a great option for those looking for something light for dessert. Another interesting dessert that was pretty to look at and tasty was the Gloomy Blueberry Mousse Dome Cake. It was nice and tart thanks to the blueberries and presented nicely. But the cookies and cream brownie cheesecake was the best of them all. Very rich chocolate flavors from the cookies and cream and just the perfect size to not feel too indulgent. Other dessert items included the s'mores tart, red velvet cupcake and Rabbit's garden chocolate pudding. 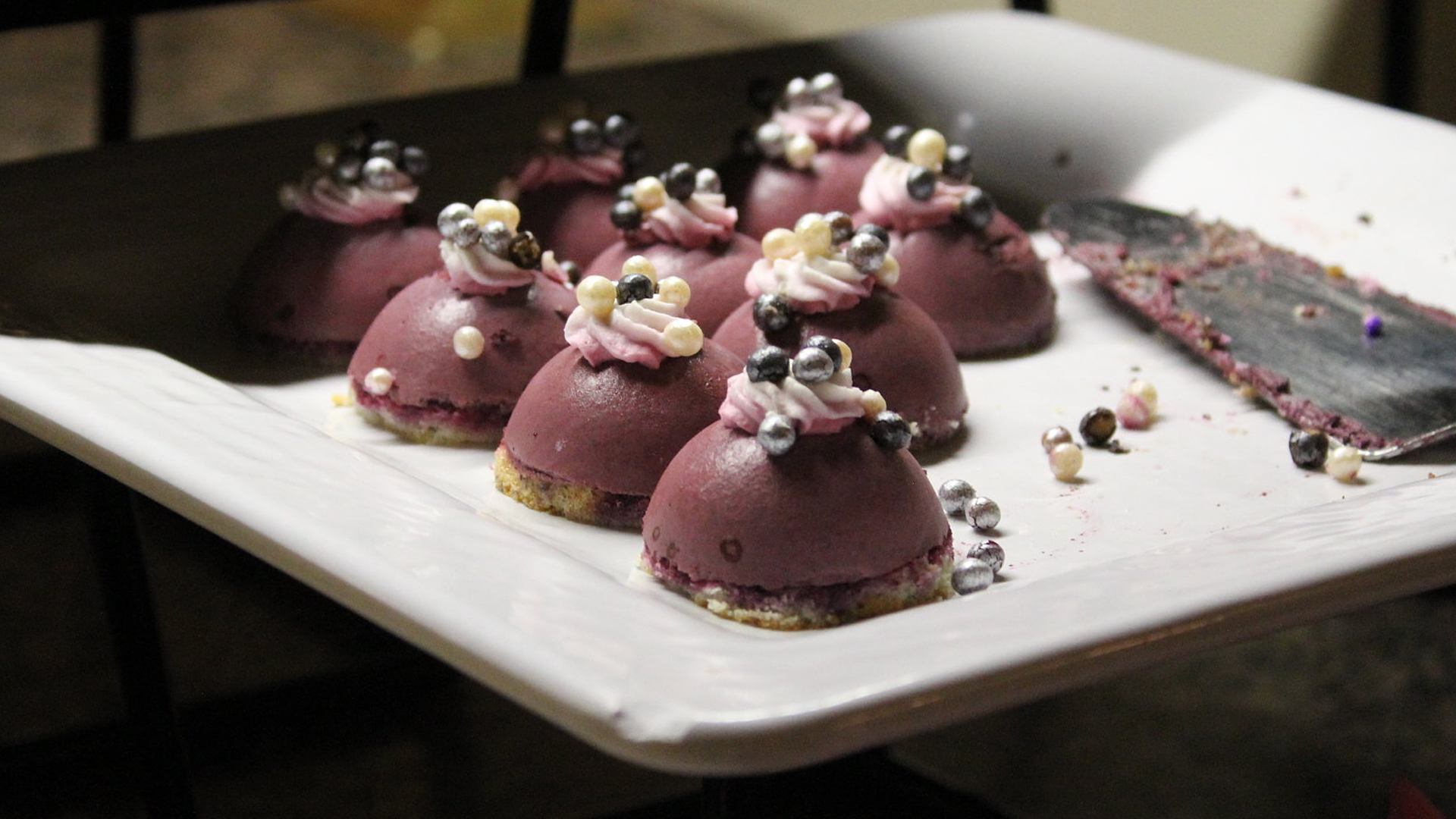 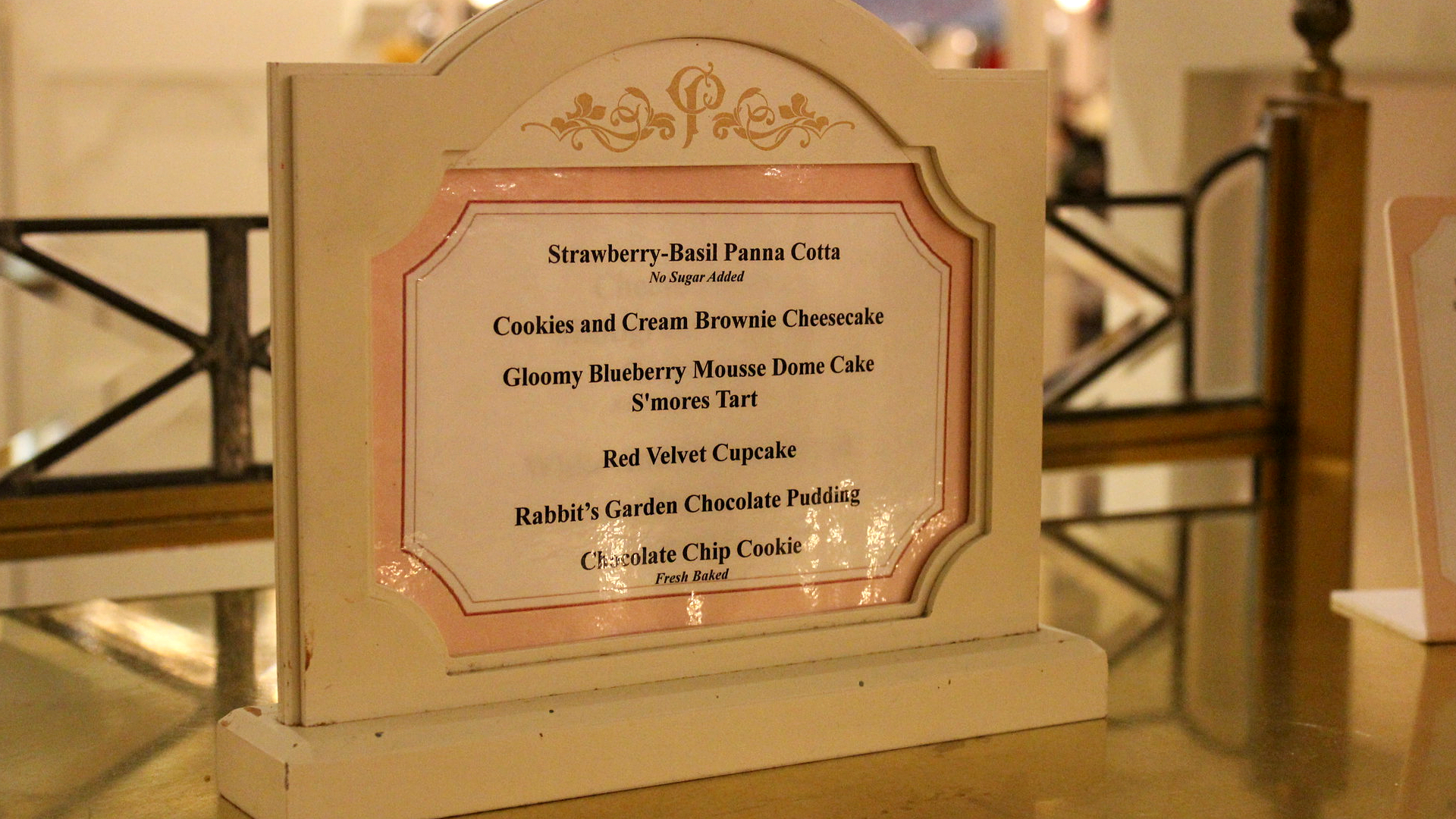 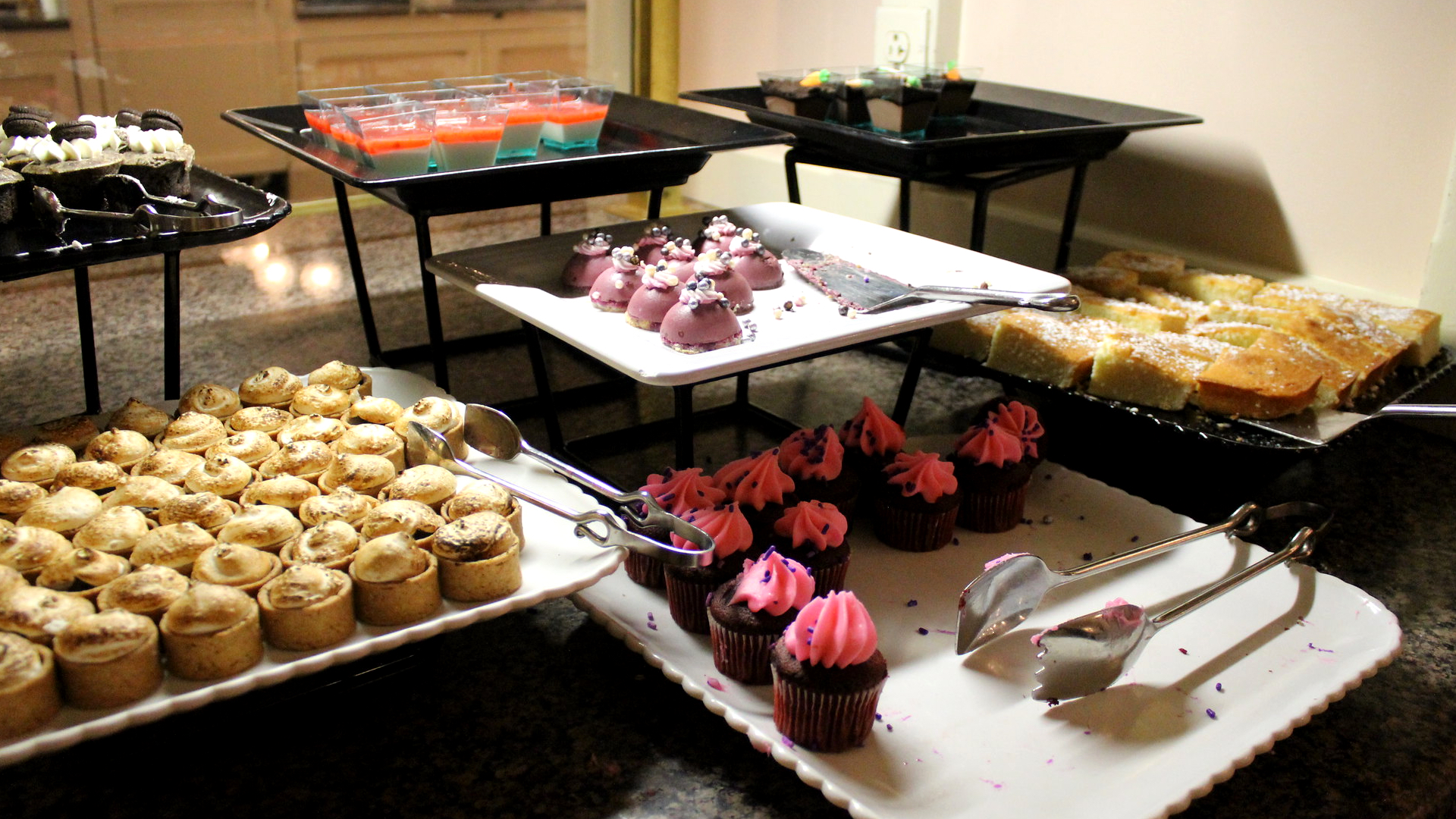 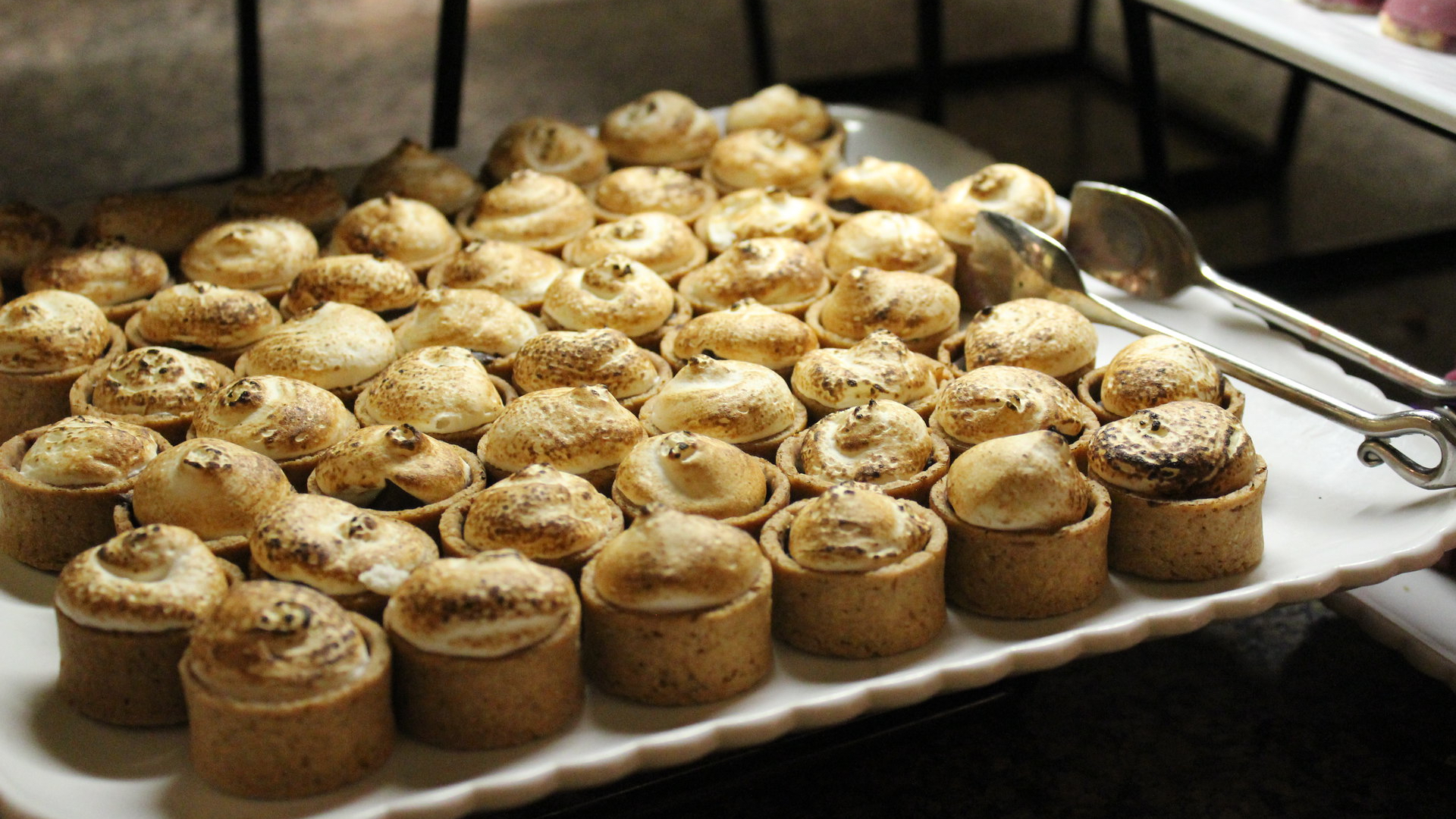 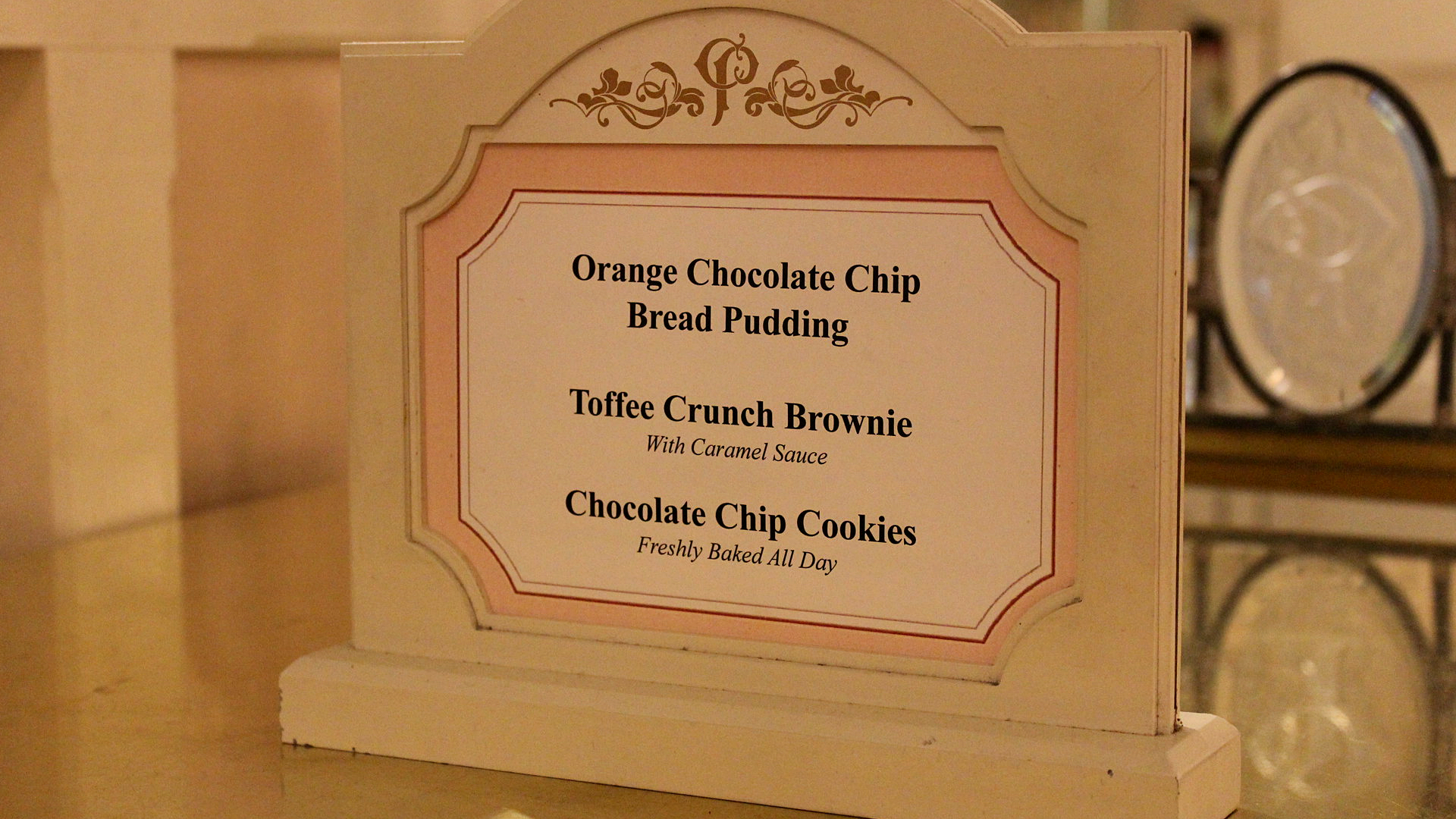 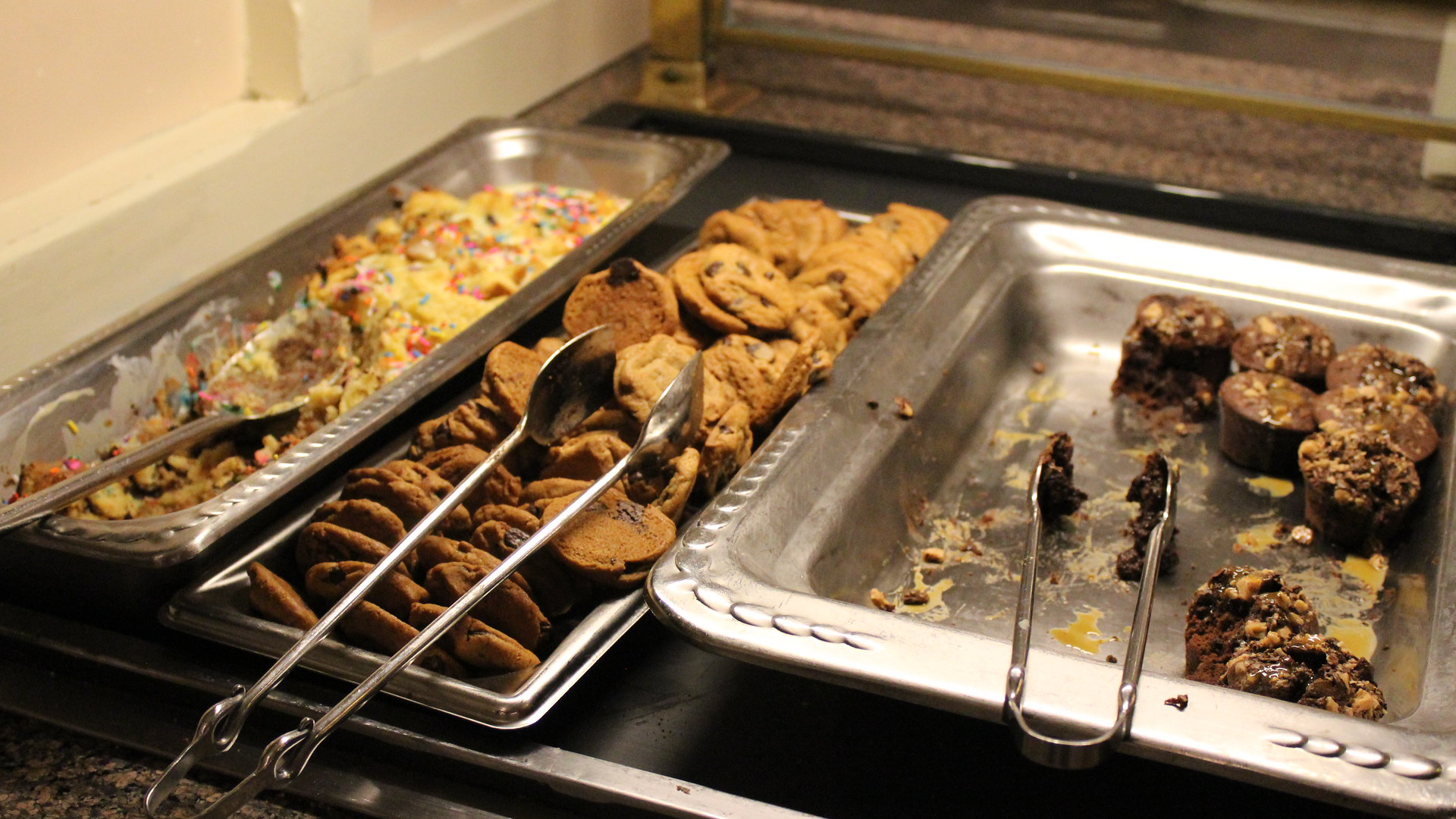 Since I was dining with a group, we all took turns heading to the buffet and watching over the little one. Midway through eating our meal, a round of characters came by including Pooh and Piglet. Each of them spent a considerable amount of time at our table posing for pictures and signing autographs. The interactions were fantastic here. Just as Piglet finished up at our table, all the characters led the kids in a mini-parade around the table and then quickly disappeared backstage.

Then we realized that Happily Ever After was about to begin just outside. At this point, almos the entire restaurant completely cleared out. Everyone stopped their meal and walked out to the patio area in front of the restaurant to watch the fireworks. I was stunned to see the entire restaurant almost completely stop and that the waiters and servers didn't rush anyone to finish their meal and leave. It seemed as though it was perfectly acceptable to pause your meal and watch the show. I peaked outside on the patio just to get an idea of what the view was like. There was almost a completely unobstructed view of the castle and fireworks from the entryway. I then realized the sidewalk area in front of Crystal Palace is a pretty good plan b spot to watch fireworks if you can't score a spot on Main Street or the hub. I didn't want to stand outside and watch the entire show, so I stepped back in to finish up my meal.

When I returned to my table, and towards the end of the fireworks, all the characters came back out. This was an excellent time to meet them since most of the tables were empty. We had yet to meet Eyore, so we waited for him and got a second chance to meet Pooh, Piglet and Tigger. The gloomy donkey spent a good amount of time with us since there was no rush to the next table. Since I've seen Happily Ever After plenty of times, I preferred this more private character experience. My niece really enjoyed her time here, since she is at a perfect age for the Pooh characters.

In the end, I had a mixed bag here. The overall ambiance and setting of this restaurant is amazing. I look forward to trying breakfast here when there's more light pouring into this beautiful restaurant. The layout of the buffet is one of the best I've seen. The two matching ends working towards the main carvery section at the center is smart and keeps the traffic flow smooth. I never waited in line for food here. The food itself is mediocre. I think the quality was good and there's certainly a good range of options, but the actual menu is not exciting. This is very traditional, American comfort food. I prefer a more exotic flare which I can experience at Epcot or Animal Kingdom. Be Our Guest remains to be my favorite restaurant at Magic Kingdom with Skipper Canteen in second place.

On this occasion, dinner at Crystal Palace was priced at $52 plus tax for the adults and $32 for kids 3 to 9. This is a pretty typical price for dinner at a character restaurant. For the record, I specify 'on this occasion' because you may or not know that prices at characters can change seasonally. This is why there's usually no official price listed on Disney World's website. If you dine at a character meal during the week of Christmas for example, Disney can increase the price slightly. My advice to you if you're concerned about sticking to a budge is to call Disney World's dining phone line. You can confirm the exact price with a Cast Member before you visit depending on the exact day you book your meal. 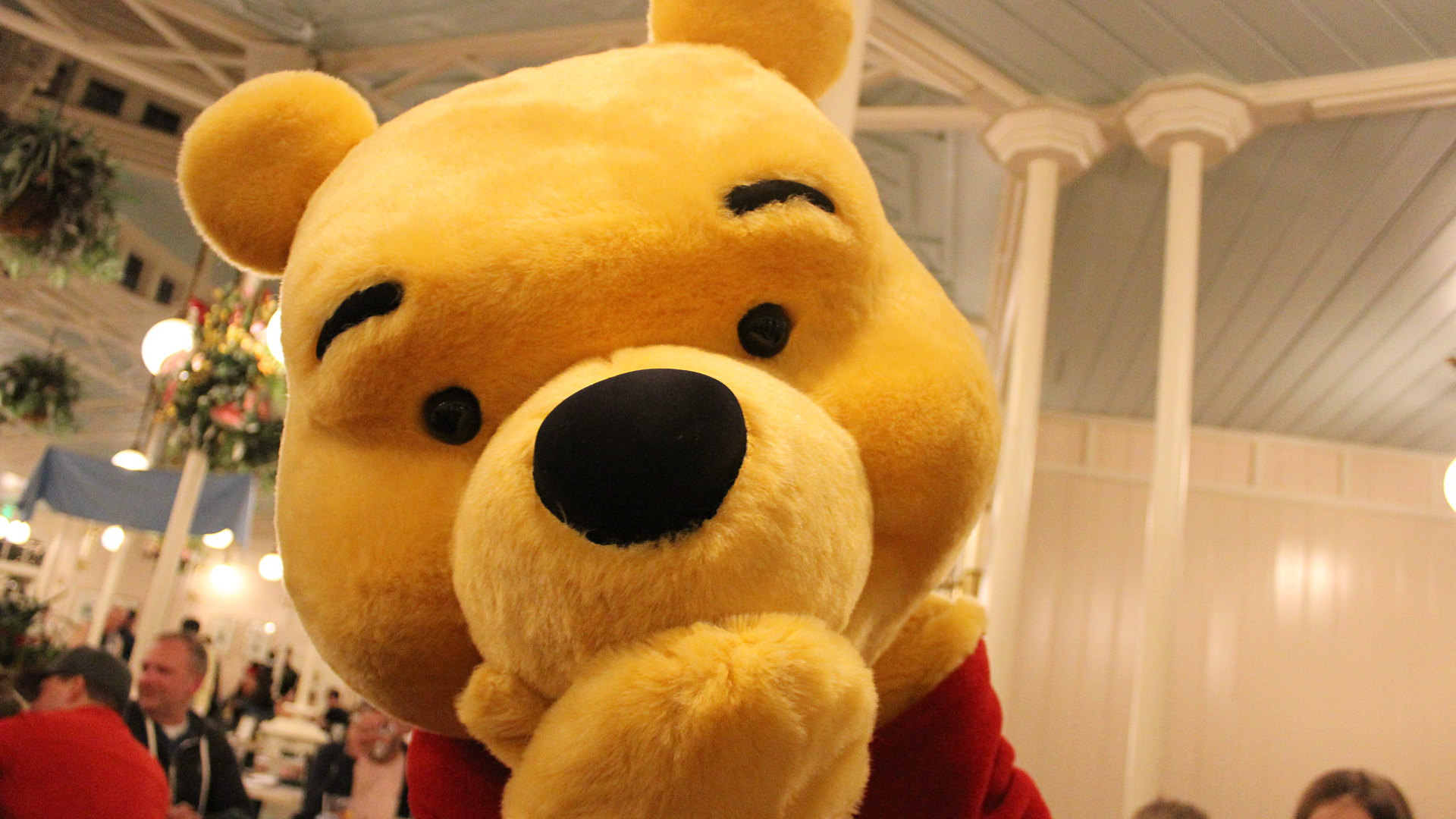 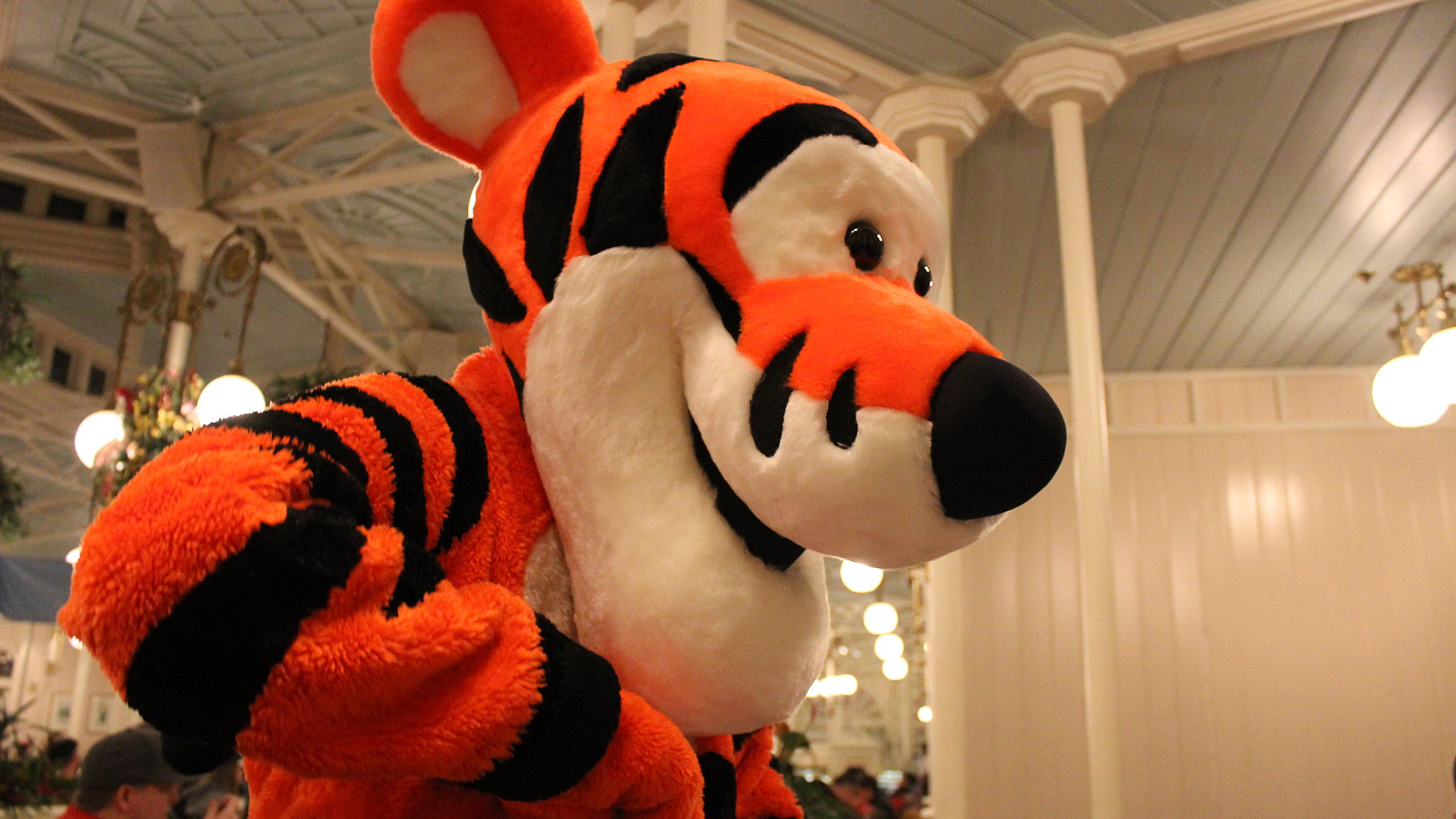 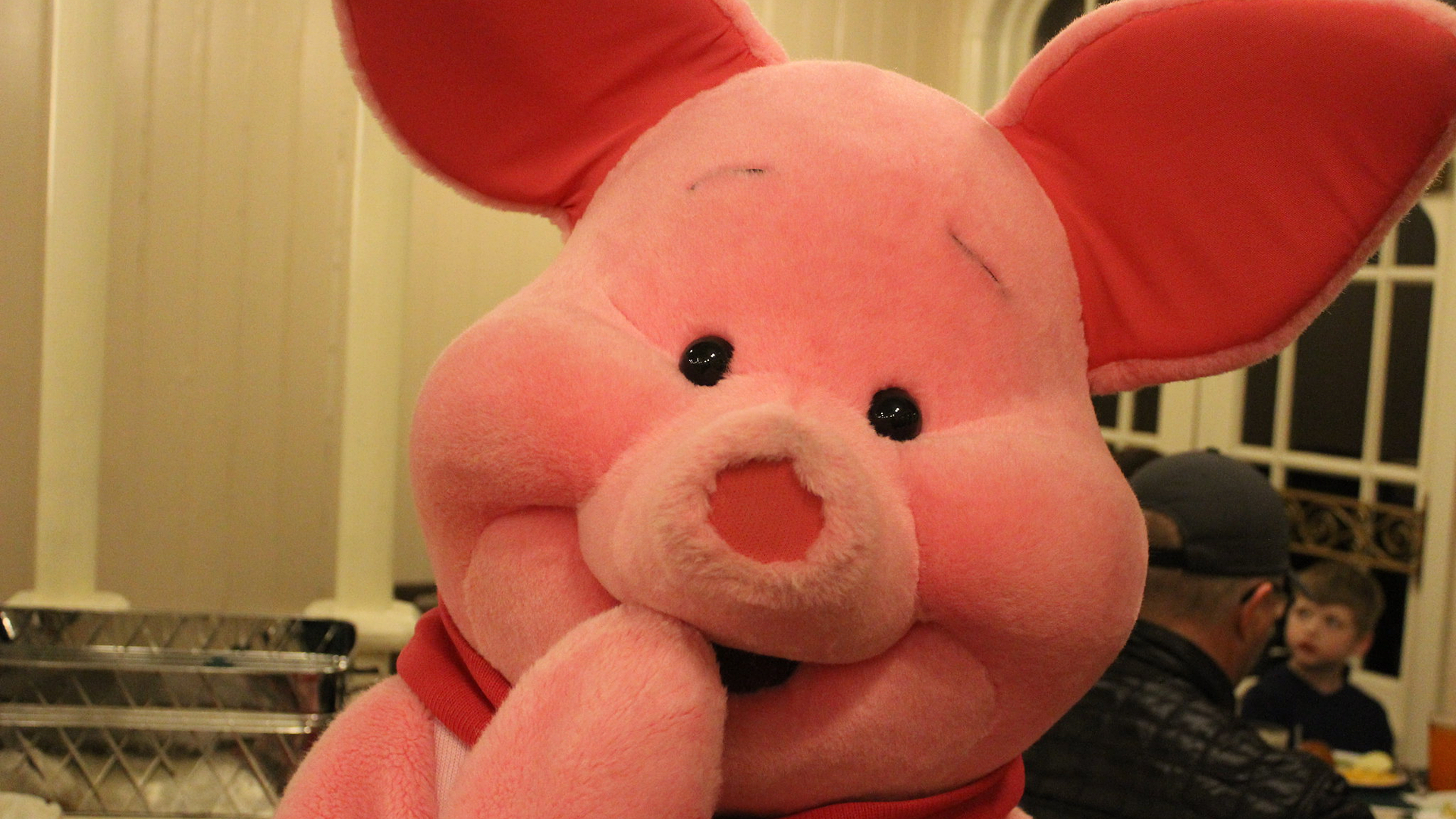 As with most of these meals, this is about meeting beloved characters. If you have a toddler who is at that age where they adore Pooh and his friends, this is a fantastic option. Yes you can meet Pooh and Tigger in Fantasyland, but their meet and greet doesn't offer Fastpass+ and the line can back up a bit. Magic Kingdom is packed with attractions and characters, and timing is everything. Alternatively, you can meet Pooh and Tigger during breakfast only at 1900 Park Fare inside Disney's Grand Floridian. I didn't have a great experience last time I dined at 1900 Park Fare, so I must admit Crystal Palace is better both in terms of food and the fact you get four Pooh characters. The only other time I've been able to meet Piglet and Eeyore is at the Halloween and Christmas Party at Magic Kingdom. I think breakfast at Crystal Palace could be a better choice. It's one of those restaurants that you can book breakfast before the park officially opens. So you can get a nice jump start on the day here. Looks like I will be visited this restaurant again in the near future!